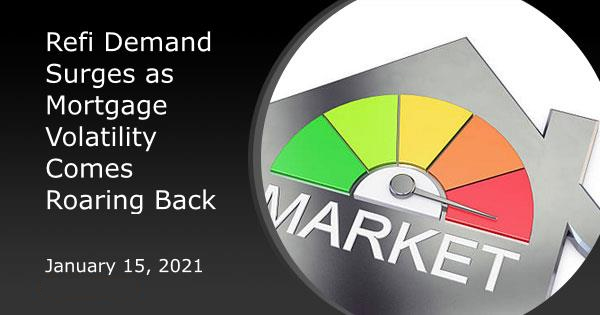 It was easy to get lulled into complacency by the second half of 2020 when it came to mortgage rates. Even as other indicators said rates should be rising, they continued on a calm journey to multiple record lows. 2021 has been very different so far!

Covid and its impacts on the economy remain the driving forces behind market trends.  That's generally been great for rates, but it also means that rates should gradually rise as we battle back against covid.  If the onset of the pandemic pushed rates to all-time lows, it's only fair that progress against the pandemic would result in rates moving up from all-time lows.

If you ask 10yr Treasury yields, that's been the case for quite a while.

Mortgage rates and Treasuries typically follow each other in near lock-step.  There are notable exceptions, but none have been as pronounced as 2020.  Mortgages simply couldn't keep up with Treasuries on the way down.  That left them with a cushion to absorb virtually all of that "push back" seen in the chart above.

In other words, that cushion allowed mortgage rates to move sideways or lower for months, even as Treasury yields moved higher.  We've warned repeatedly that this was increasingly likely to change.  Last week, it finally did.

Although there's technically still some cushion left, it's now too small to soak up bigger instances of volatility in Treasuries.

As last week's newsletter discussed (get caught up here), the Georgia senate election resulted in one of the sharpest interest rate spikes of the past few years.  Granted, that's a fairly low bar to clear when rates have been doing so well over that time, but it nonetheless raised concerns about where we may be going next.

When rates rise this quickly, traders are on the lookout for additional weakness (and an opportunity to find a ceiling).  That was the first order of business this week.  No one wanted to be the first to catch that falling knife (big moves like this can create momentum that lasts for days/weeks, and traders can get burned if they bet on a rebound too quickly), but risks began to subside on Tuesday afternoon after a strong 10yr Treasury auction.  Bonds didn't panic again for the rest of the week, leaving the bigger-picture impression that the early 2021 rate spike has stabilized.

You may have seen other news headlines that suggest it was a bad week for mortgage rates.  It wasn't.  That was LAST week.  The headlines in question are based on stale information.  By Friday afternoon, the average lender was offering rates that were at least as low as those seen last Friday.

The issue has to do with a popular weekly rate survey from industry giant Freddie Mac.  The survey does a fine job capturing broad strokes over time, but is severely limited when it comes to timely day-to-day changes.  In short, the survey is just now capturing LAST WEEK'S rate spike.  Here's how daily rates have been moving by comparison (note: the green line is a bit higher because it includes refinances.  Freddie just asks loan officers for their "best" rate, and in this market, that's always purchases).

Speaking of purchases and refis, this week's mortgage application data was very interesting.  While you might expect a big rate spike to dissuade refi demand (and generally speaking, you'd be right), last week's rate spike motivated homeowners to get off the fence.  The count of refi applications was the highest it's been since the 2 best weeks at the start of the pandemic.

Next week brings additional housing market data starting on Wednesday with another look at mortgage applications and a new report on builder confidence.  Additional construction and sales data will be reported on Thursday and Friday. Bonds (and most mortgage lenders) will be closed on Monday in observance of Martin Luther King Jr. Day.