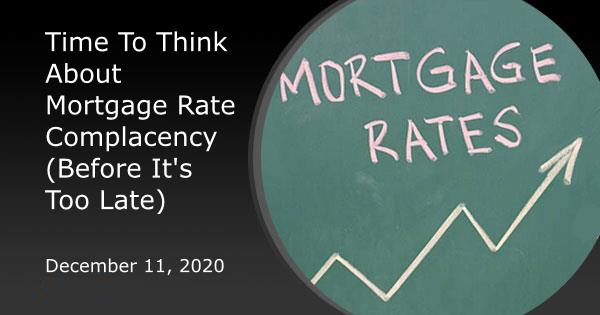 Time To Think About Mortgage Rate Complacency (Before It's Too Late)

After months of waiting and multiple successive reports of all-time lows from other sources, the average lender is now finally back in line with the actual all-time lows seen on August 4th, 2020.

With different sources making this claim at different times, how do you know who's right?  Actually, everyone's right, as long as you understand how they arrive at their numbers.

For instance, surveys that ask lenders for their best possible rates are logically going to suggest lower than average rates because refinances cost a lot more than purchases at the moment, despite comprising a majority of the market.  That's why Freddie Mac's survey has seen successive all-time lows even though refi-weighted rates are just now getting back to that promised land.

So rates are back!  But now what? Will they go lower?  Are they at risk of a bounce?  For questions like this, rate watchers have long been turning to 10yr Treasury yields as the "secret" source of guidance.

Actually, it's no secret.  Mortgage rates tend to behave a lot like other longer-term bonds because mortgages actually ARE longer-term bonds.  After all, a bond is just an agreement for a borrower to pay lender back over time.  In the case of US Treasuries, investors are lending money to the US government.  In the case of mortgages, banks lend to people who pay back over time.

10yr yields and mortgage rates are so similar in their movement that one typically need only know what 10yr yields are up to.  Case in point, check out the left side of the following chart.

But what in the world is going on with the right side of the chart?  Yes, there's the handy, generic 2020 answer "well, the pandemic probably did something to screw things up and now there's a new normal," but let's dig deeper.  Those interested in the simplest explanation can just read the next paragraph and go about their business.

The simplest explanation is that certain forces prevented mortgage rates from falling as quickly as Treasury yields.  Thus, mortgage rates have a cushion that has allowed them to hold steady even as Treasury yields have moved back up.  That's actually a fantastically short and sweet way to explain and understand it if not for that pesky issue of the blue line moving up and above the orange line in the chart above.

In other words, mortgage rates not only closed the gap, but now they're lower than Treasuries say they should be.   That's OK, because Treasuries don't get the final say.  That honor goes to mortgage bonds (officially mortgage-backed-securities or MBS).  These bonds are what groups of similar loans "turn into" through the process of securitization.   They can then be traded by investors just like Treasuries.  As they trade, their value changes by the minute.  The changes in that value can be tracked and charted just like the 10yr Treasury yield.

As you'd expect, that value has almost everything to do with how mortgage rates move over time (after all, this is a real-time reflection of what mortgage debt is worth to investors).  As such, they are the primary raw ingredient in the mortgage rate recipe. With apologies to the gluten-free folks, mortgage bond yields are like the flour to mortgage rates' cake.

There's a lot of correlation there, obviously, but nuances are easier to see if we slide the orange line up to rest on the blue line--mostly.

As you can see, there's a gap between the two since the pandemic.  We can measure the size of that gap and give it its own line on the chart.  Since mortgage rates are higher than mortgage bonds say they should be, this line is like the cushion for mortgage lender profitability.

The cushion means that the bond market could move in a way that suggests higher rates while mortgage lenders continue to hold rates steady.

But as you may have noticed, the cushion is getting smaller...

Once it gets back to its normal levels, mortgage rates will feel more compelled to follow mortgage bonds and the broader bond market.  Why would that be an issue?  For starters, mortgage bonds have been doing such an amazing job compared to Treasuries that investor sentiment finally shifted in the other direction.

In other words, mortgage rates can outperform Treasuries either because mortgage bonds themselves are outperforming or because lenders have a cushion, and we're down to the cushion being our last line of defense.  Bottom line, if Treasury yields continue to rise, mortgage bond yields will be forced to follow.  Without much of a cushion left, that means it wouldn't take long for mortgage rates to be pulled higher as well.

Is there a reason to be concerned that Treasury yields will rise?

Yes!  Several of them.  Vaccines offer brighter economic hopes.  Stimulus spending incurs Treasury debt (which pushes yields/rates higher).  The economy is learning how to operate with high covid case counts much better than it did in early 2020.  And the Fed is on a fence about its next move.  Taken together, it seems that Treasuries are trying to tell us something.

Of course if traders knew where rates would be in the future, they'd already be there.  A lot can happen in the coming weeks and months to derail the rising rate trend in Treasuries.  The biggest near term risks involve fiscal stimulus and the Fed.  While a longshot at this point, if lawmakers manage to approve stimulus before the Fed meeting next Wednesday, it would likely put significant upward pressure on rates because it would lower the odds of the Fed making a rate-friendly move.

What kind of move are we talking about?  The Fed is considering making an adjustment to the balance of bonds that it currently buys.  The adjustment would help longer-term rates like mortgages.  This is about a 50/50 chance right now, which means the bond market is likely to react either way.  Fiscal stimulus from congress increases the odds that the Fed would sit tight on additional monetary stimulus.

The Fed's policy decision will be announced at 2pm ET on Wednesday.