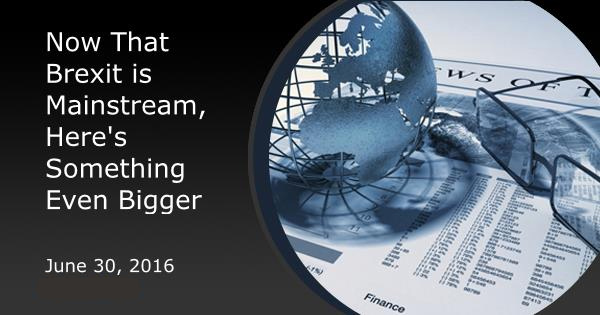 Now That Brexit is Mainstream, Here's Something Even Bigger

It was a surprisingly calm week for housing and mortgage markets given last week's Brexit drama and the big move in stocks.

In housing-related data, Pending Home Sales for the month of May, fell 3.7 percent, according to the National Association of Realtors.

The Mortgage Bankers Association reported a slight decrease in both  and purchase applications, but it's important to note that last week's drop in mortgage rates won't be reflected until we get next week's report.

Home Price data was released on Tuesday, showing a  5.4 percent year-over-year increase in the 20 city index.  Gains continue to be led by the Denver, Portland, and Seattle markets.

Analysis from Freddie Mac examined two topics off the beaten path of housing data.  The first addresses the question of the long-term decline in home-ownership and discusses what would need to happen in order for home-ownership to hit 50 percent.  The second piece looks at the outsized impact that baby boomers have on the housing market.

Moving on to the week's biggest story, the UK's withdrawal from the European Union (aka "Brexit) is all over the headlines now--largely due to its massive impact on stocks last week.  As you may have heard, Brexit won't happen overnight. In fact, it will take years before the UK finally sorts out its relationship with the EU.

So why have rates remained lower even as the recovery in stocks suggests that the Brexit panic has subsided?  If rates typically move in the same direction as stocks, which one is lying at the moment?

Rates are driven by the bond market and the bond market tends to do a better job of adjusting to long-term expectations based on current events.  Stocks, on the other hand, may rise and fall almost serendipitously by comparison.

For bonds, this Brexit business is just another symptom of a disease that's been festering for decades.  After working the kinks out of modern monetary policy in the 70's, rates have been moving toward all-time lows with an eerie regularity. 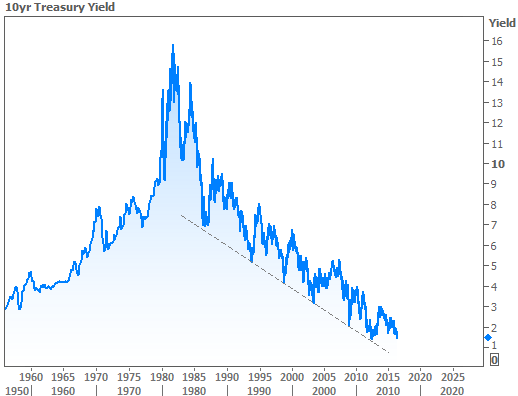 Most would assume that falling interest rates have limits and that we'd see those limits the closer we got to zero, but a quick glance at Japanese and European equivalents to the US 10yr yield shows us that "zero" was no deterrent to that downward momentum. 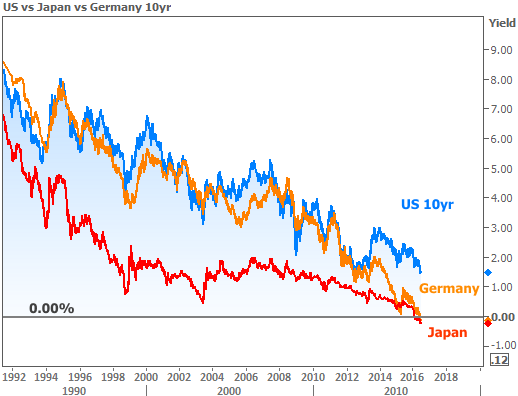 Granted, the US is its own, unique country, but given the level of global interdependency in financial markets and the economy, US rates simply can't ignore the fact that there are more than 10 trillion dollars of government debt trading at negative rates around the world.

This huge mass of negative-yielding debt (read: "rates under zero") is the smoking gun for something that US policymakers are only now coming to terms with.  Fed Chair Janet Yellen hit this nail on the head (finally) 2 weeks ago when she said that the factors keeping rates low are "not going to be rapidly disappearing but will be part of a new normal."  What would make her say such a thing?

There are several key factors underlying Yellen's newfound stance, and indeed the long-term push toward lower rates itself.  These include things like decreasing productivity, lower , increasing wealth inequality, high levels of government debt (easier to make payments on that if rates are low), and a general absence of exponential growth drivers like the post-war manufacturing boom or the proliferation of the internet.  Taken together, these factors add up to the phrase you're bound to hear more and more: "global growth concerns."

Think about it... Over the past few decades, we've rapidly connected the entire world with  instantaneous exchange of information and money (via the internet).  Whatever the dollar amount of global GDP that was created by this electronic awakening, where are we going to get that sort of global growth in the future?

Many see this global tech/internet boom as a one-time deal that marks the apex of exponential global growth.  The longer that notion goes without being refuted, the more sovereign bond yields move into negative territory.

Does this mean all rates will eventually be under zero and that you should never lock a rate because rates always move lower?  Absolutely not!  The time frame from 2003-2007 fits into the charts above, yet rates in the US were generally rising during that time.  We're talking about the BIG picture here.  Short term rate spikes are inevitable, and there will be plenty of them that last longer than the average borrower's patience.

With that in mind, we're pushing up against some of the lowest mortgage rates in history.  This is the point at which lenders have been less and less willing to improve rates very much or very quickly.  It's also the territory that leaves us at more risk of bouncing back toward higher rates, even if that proves to be yet another bump in a road that ultimately leads to new all-time low rates.