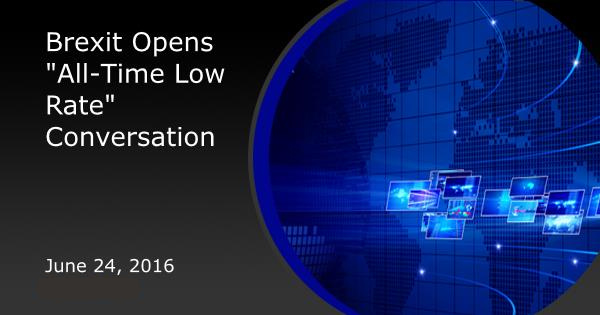 Last week, we discussed the reasons that the British referendum to leave the European Union (aka "Brexit") would be a big deal for mortgage rates.  It turns out "big deal" may have been an understatement.

In a surprise to many market participants, British voters approved the referendum and the U.K. will now begin the process of extricating itself from the EU.  For all the reasons discussed last week, this created a significant reaction in financial markets, quickly bringing US Treasury yields very close to all-time lows.

We talk a lot about Treasury yields (particularly the 10yr) because they are the quintessential benchmarks for interest rate movement in the US.  Especially in the wake of the financial crisis, 10yr Treasuries have been an excellent indicator for mortgage rate movement.

As such, it's no surprise to see big improvements in mortgage rates following the Brexit vote. But mortgage rates aren't nearly as close to their all-time lows as Treasury yields.  What's up with that? 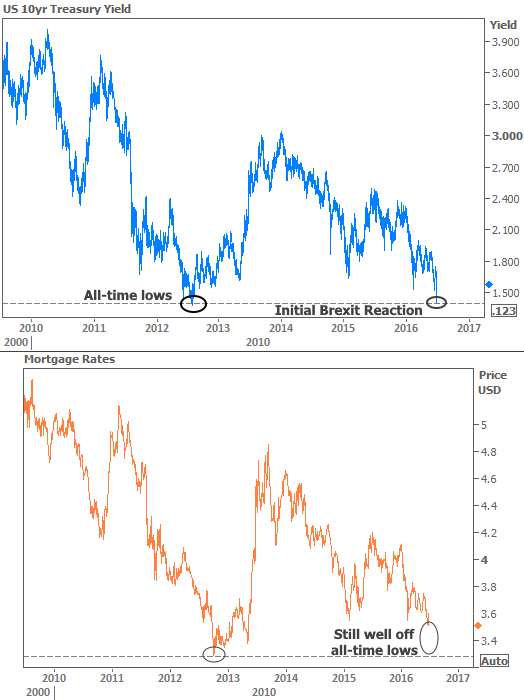 First of all, even under the best of circumstances, mortgage rates have a hard time keeping up with the size and pace of movement in Treasuries.  The bonds that underlie mortgage rates (MBS) don't see nearly as much trading activity despite the relatively large transaction size.  Treasuries, on the other hand, can respond instantly and globally.  Meanwhile, MBS buyers may have a hard time finding the right seller (or vice versa) as quickly as they'd like, and they're almost always limited to US trading hours.

All other things being equal, if we gave mortgage rates enough time, they would eventually match the movement seen in Treasuries, assuming Treasury yields went lower and stayed there.  That doesn't tend to be how things work in financial markets though and herein lies another problem for mortgage rates when it comes to keeping up with Treasuries.  Volatility not only causes MBS to underperform, but it also discourages lenders from offering aggressive pricing on the first day of a major improvement in MBS.

Then there are the more complicated nuts and bolts.  For example, the guarantee fees imposed by Fannie and Freddie are higher today than they were in 2012.  Other costs are higher as well due to implementation of new compliance laws.  These higher costs mean MBS would have to reach even better levels than they did in 2012 in order for lenders to get rates back to 2012's all-time lows.

None of this is to say we can't get back to those lows, simply that it will take more doing and, at the very least, more time.

Existing Home Sales led the charge in terms of housing data this week, with prices hitting an all-time high and sales hitting the highest levels in nearly a decade.

New Home Sales, on the other hand, fell 6 percent month-over month, despite maintaining a year-over-year increase of 8.7 percent.

Earlier this week a survey from the MacArthur Foundation showed that more than 4 in 5 Americans think housing affordability is a problem, with 3 in 5 seeing it as a serious problem.

A CNBC article pushes back on the notion that housing inventory and "a lack of starter homes" is behind sluggish sales, citing several areas of the country where starter home demand (and price) is actually falling.

Overall, home price data continues to be a mixed bag, with long-term gains offset by deceleration in those gains.  Specifically, FHFA reported only a 0.2 percent increase in prices in its most recent data compared to an increase of 0.8 percent in the previous month's data.  On an annual basis, appreciation declined from 6.1 to 5.9 percent.