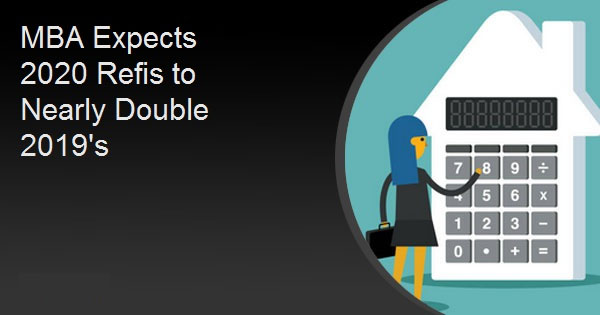 The Mortgage Bankers Association's (MBA's) November 2020 economic forecast ups the ante from its rosy October version. Its revisions are due to the strong pace of home sales and low interest rates which continue to fuel a refinancing boom. MBA has increased its prediction for total mortgage originations from the $3.175 trillion estimate in October to $3.39 trillion. This would be a 50 percent increase from the $2.25 trillion in total originations in 2019, and the highest total since 2003.

Refinancing, of course, is the driver behind these numbers. By the end of the year MBA expects those originations to have increased by 91.5 percent year-over-year to $1.97 trillion, potentially the highest total since 2003. Purchasing volume has not been shoddy either. That total is expected to be the highest since 2005 at $1.42 trillion, representing annual growth of 16 percent.

While overall volume next year is expected to decline, MBA expects an all-time high for purchase mortgage originations, $1.59 trillion. If this occurs it would eclipse the previous peak of $1.51 trillion which was achieved in 2005.Offsetting this good news, however, is an expected cooling of refinance activity. Those originations will slow to $971 billion, bringing total originations to $2.56 trillion. This would still be the second highest volume in the past 15 years.

MBA also expects the economy to rebound next year with a 3.0 percent expansion in the GDP after a 2.5 percent decline this year. Additionally, the unemployment rate is expected to improve more rapidly, reaching the 5 percent mark by the end of 2021.  MBA predicts mortgage rates will end this year at 2.9 percent and to increase to 3.3 percent by Q4 2021.