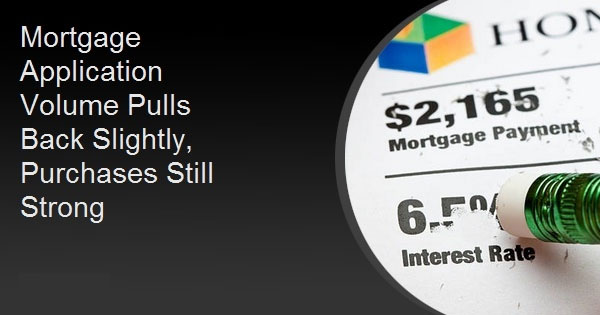 Despite a healthy upward bump in purchase applications, overall mortgage volume declined last week. The Mortgage Bankers Association (MBA) said its Market Composite Index, a measure of application volume, dipped 0.3 percent on a seasonally adjusted basis during the week ended November 13, and was down 2 percent unadjusted. The week's results were not adjusted to account for the Veterans' Day holiday that occurred midweek.

The Refinance Index was down 2 percent from the previous week but was 98 percent higher than the same week one year ago. The refinance share of mortgage activity decreased to 69.8 percent of total applications from 70.0 percent the previous week.

The seasonally adjusted Purchase Index rose 4 percent. It was 1 percent lower than the prior before adjustment but was up 26 percent compared to the same week in 2019.

"Mortgage market activity was mixed last week, despite the 30-year fixed rate mortgage staying below 3 percent. The purchase market recovered from its recent weekly slump, with activity increasing 3 percent and climbing above year-ago levels for the 26th straight week. Housing demand remains supported by the ongoing recovery in the job market, and an increased appetite from households seeking more space because of the pandemic," said Joel Kan, MBA's Associate Vice President of Economic and Industry Forecasting. "The refinance index decreased last week - driven by sharp declines in FHA and VA applications - but remained a robust 98 percent above a year ago. The average refinance loan balance of $291,000 last week was the lowest since January. Many borrowers with higher loan balances may have acted earlier on in the current refinance wave."

The average contract interest rate for 30-year fixed-rate mortgages (FRM) with origination balances at or below the conforming limit of $510,400 increased to 2.99 percent from 2.98 percent, with points increasing to 0.37 from  0.35. The effective rate increased from last week.

The average contract interest rate for jumbo 30-year FRM, loans with balances exceeding the conforming limit, decreased to 3.11 percent from 3.13 percent. Points decreased to 0.28 from 0.31 and the effective rate declined.

Thirty-year FRM backed by the FHA had a contract rate of 3.11 percent, up from 3.08 percent. Points were unchanged at 0.37 and the effective rate increased from the prior week.

The average contract interest rate for 15-year FRM fell 4 basis points to 2.59 percent and points declined to 0.35 from 0.37. The effective rate was higher.

The average contract interest rate for 5/1 adjustable rate mortgages (ARMs} increased to 2.84 percent from 2.79 percent, and points increased to 0.53 from 0.42. The effective rate moved higher. The ARM share of activity decreased week-over-week from 2.0 percent to 1.9 percent.

MBA's latest Forbearance and Call Volume Survey found that, as of November 8, an estimated 2.7 million mortgage loans were in forbearance. This is 5.47 percent of the loans in servicer portfolios, down 20-basis points from the previous week and the 11th straight week the total has improved.

"Declines in the share of loans in forbearance continued this week, with a significant increase in the rate of forbearance exits - particularly for portfolio and PLS loans," said Mike Fratantoni, MBA's Senior Vice President and Chief Economist. "More than 76 percent of borrowers in forbearance are now in an extension, as we are well past the six-month point for most borrowers' forbearance plans."

Of the borrowers who have exited forbearance since the June 1: