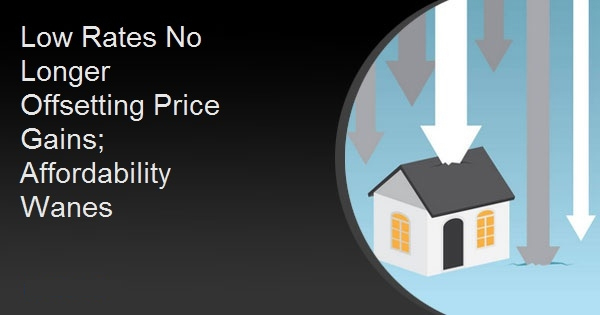 The National Association of Realtors® (NAR) said on Thursday that home prices have continued to grow in each of the 181 areas it tracks for its quarterly metro home price report. Both record-low mortgage rates and depleted inventories of existing homes for sale contributed to the annual growth.

"Favorable mortgage rates will continue to bring fresh buyers to the market," said Lawrence Yun, NAR chief economist. "However, the affordability situation will not improve even with low interest rates because housing prices are increasing much too fast."

The nation's median existing single-family home price climbed 12.0 percent on a year-over-year basis, to $313,500. All four major regions saw double-digit year-over-year price gains, led by the West at 13.7 percent, but followed closely by the Northeast at 13.3 percent and the South and Midwest at 11.4 and 11.1 percent, respectively. At this rate, home prices were growing four times as fast as median family income, which was 2.9 percent.

"In light of the pandemic, prices jumped in a number of metros that contain larger properties and open space - where families could find extra rooms, including areas for an at-home office," said Yun.

The West also continues to lead the nation with eight of the ten most expensive metro areas. The remaining two are in the East. San Jose and San Francisco both have median prices of over $1 million and are followed by Anaheim, Urban Honolulu, San Diego and Los Angeles, all with medians over $800,000. The remaining four, Boulder, Seattle, Bridgeport, and Boston, have medians ranging from $680,000 down to $580,000.

Inventories have continued to shrink with only 1.47 million existing homes available at the end of the third quarter. This is a year-over-year decline of 19.2 percent and an estimated supply of 2.7 months at the current sales pace.

Rising prices had been offset in recent months by declining interest rates, but Yun notes, price increases are now taking a toll on affordability. The monthly mortgage payment on a typical existing single-family home - one that is financed with a 30-year fixed-rate mortgage and 20 percent down payment - rose to $1,059 in the third quarter. This is an increase from the second quarter ($1,019) and from 2019's third quarter numbers ($1,032).

At the median U.S. family income of $81,477, mortgage payments accounted for 15.6 percent of income in the third quarter, up from 14.8 percent the prior quarter but unchanged from the share one year ago. The effective 30-year fixed mortgage rate averaged 3.01 percent in the third quarter of 2020, down from both the second quarter of 2020 (3.29 percent) and from one year ago (3.71 percent).

With home prices continuing to rise, NAR said that families needed roughly $50,819 in annual income to comfortably afford a mortgage on a typical existing single-family home, up from $48,912 in the second quarter and from $49,536 this time last year. A 30-year fixed-rate, 20 percent down payment mortgage is considered affordable if the mortgage payment accounts for no more than 25 percent of a family's income. A home purchase was affordable because the median family income was $81,477.

"As home prices increase both too quickly and too significantly, first-time buyers will increasingly face difficulty in coming up with a down payment," said Yun. "Transforming raw land into developable lots and new supply are clearly needed to help tame the home price growth."