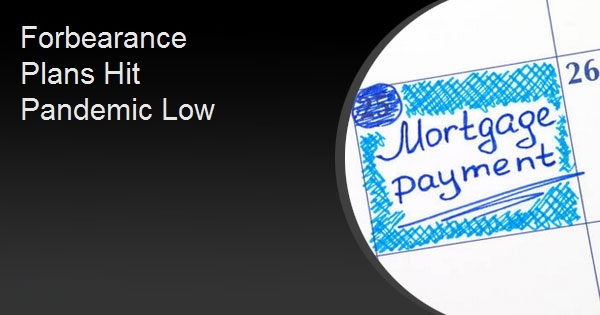 The number of COVID-19 related forbearances plans headed downhill at an increasing pace over the last few week although there is no guarantee the improvement will continue. Black Knight says there was another 4 percent decline, representing 121,000 loans, over the past week. This brings the improvement in the number of plans since just the first of November to 416,000 loans or 9 percent.

As of November 10, there were 2.735 million loans remaining in plans. This represents 5.2 percent of the 53 million active mortgage loans in servicer portfolios and an aggregate unpaid principal balance of $559 billion. Of the loans still in active forbearance, 81 percent have had their terms extended at some point since March.

Black Knight attributed the decline to servicers addressing the bulk of remaining October expirations. Some 191,000 homeowners were removed from the forbearance rolls over the past week. At the same time, the 68,000 forbearance starts this week was the lowest number since the first week of October. New plans (as opposed to restarts) hit a low of 31,000.  Another 98,000 homeowners had their forbearance plans extended this week.

The decline in plans was seen across all investor classes. Loans serviced for portfolio lenders and private label security (PLS) investors had the largest change, down 49,000 loans or 7.1 percent. Those serviced for the GSEs Fannie Mae and Freddie Mac decreased by 45,000 (4.2 percent) and there were 27,000 fewer FHA and VA loans, a -2.4 percent change.

Black Knight concludes, "There have been positive signs so far in November, but with 323K active forbearances having recently expired or set to expire in the month, improvement may be somewhat limited in the coming weeks."