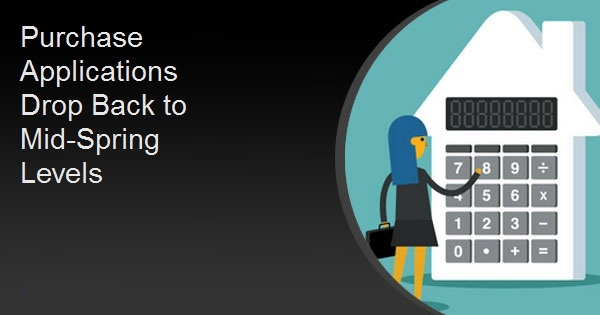 Mortgage applications, especially for home purchases, pulled back from the previous week's level. The Mortgage Bankers Association (MBA) said its Market Composite Index, a measure of application volume, decreased 0.5 percent on a seasonally adjusted basis during the week ended November 6. On an unadjusted basis, the Index decreased 1 percent compared with the previous week.

Refinancing remained the strength of the Composite Index and that component gained 1 percent week-over-week and was 67 percent higher than the same week one year ago. The refinance share of mortgage activity increased to 70.0 percent of total applications from 68.7 percent the previous week.

The seasonally adjusted Purchase Index decreased 3 percent from one week earlier. On an unadjusted basis it was down 5 percent but remained 16 percent higher than the same week one year ago.

"Mortgage application activity was mixed last week, despite the 30-year fixed rate decreasing to 2.98 percent - an all-time MBA survey low. The refinance index climbed to its highest level since August, led by a 1.5 percent increase in conventional refinances," said Joel Kan, MBA's Associate Vice President of Economic and Industry Forecasting. "The purchase market continued its recent slump, with the index decreasing for the sixth time in seven weeks to its lowest level since May 2020. Homebuyer demand is still strong overall, and activity was up 16.5 percent from a year ago. However, inadequate housing supply is putting upward pressure on home prices and is impacting affordability - especially for first-time buyers and lower-income buyers. The trend in larger average loan application sizes and growth in loan amounts points to the continued rise in home prices, as well as the strength in the upper end of the market."

The average contract interest rate for 30-year fixed-rate mortgages (FRM) with conforming loan balances at or below the conforming limit of $510,400 decreased to a survey low of 2.98 percent from 3.01 percent, with points decreasing to 0.35 from  0.38. The effective rate decreased from last week.

The average contract interest rate for jumbo 30-year FRM, loans with balances exceeding the conforming limit, fell by 5 basis points to 3.13 percent. Points increased to 0.31 from 0.30 and the effective rate moved lower.

Thirty-year FRM backed by the FHA had a rate of 3.08 percent, unchanged from the prior week. Points increased to 0.37 from 0.26 and the effective rate increased.

The rate for 15-year FRM was also unchanged, remaining at 2.55 percent. Points rose to 0.37 from 0.35, pushing the effective rate higher.

The average contract interest rate for 5/1adjustable rate mortgages (ARMs) rose to 2.79 percent from with 0.42 points. The prior week the rate was 2.67 percent, with 0.52 point. The effective rate was also higher. The ARM share of activity decreased to 2.0 percent of total applications from 2.1 percent.

"With declines in the share of loans in forbearance across the board, the data this week align well with the positive news from October's jobs report, which showed a gain of more than 900,000 private sector jobs, and a 1 percentage point decrease in the unemployment rate," said Mike Fratantoni, MBA's Senior Vice President and Chief Economist. "A recovering job market, coupled with a strong housing market, is providing the support needed for many homeowners to get back on their feet."

Added Fratantoni, "However, the data continue to show that servicers are still having difficulties reaching borrowers who have reached the six-month point of their forbearance period. Servicers are required to get borrowers' consent to extend forbearance beyond six months. Homeowners who continue to be impacted by hardships related to the pandemic should contact their servicer."

MBA said, of the borrowers who exited forbearance from June 1 through November 1, 2020: