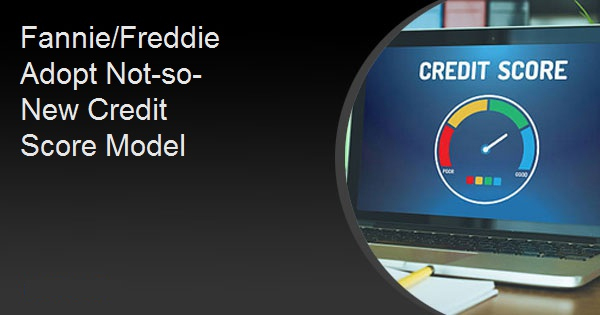 Tried and true has won out over shiny and new, at least when it comes to GSE credit scoring. And at least for the moment.

The Federal Housing Finance Agency (FHFA) announced on Tuesday that it has validated and reapproved the Classic FICO credit score model for use by Fannie Mae and Freddie Mac for assessing the creditworthiness of mortgage borrowers. The Agency said this would allow the GSEs "to continue supporting the mortgage market while assessing more modern credit score models that were submitted in response to the 2020 Joint Enterprise Credit Score Solicitation."

That solicitation was issued jointly by the GSEs In February. They were seeking possible alternatives to the model which has, for years, been the only credit score they accepted. The major credit agencies, Equifax, TransUnion, and Experian, have fought for years to gain entry to the GSE market, including taking the matter to court.

Both GSEs had said the solicitation itself was merely the first of four phases described in the FHFA final rule on the validation and approval of third-party credit score model(s) that the GSEs can use. Its deadline for submissions of contenders was September 15 which brought the GSEs and their regulator hard up against the November 20 deadline imposed for the credit model decision by the 2018 Economic Growth, Regulatory Relief, and Consumer Protection Act.

FHFA called the approval of the FICO product an incremental step in meeting the requirements of the Act. It said it expects it will take the GSEs an additional year to complete the validation and approval process of the remaining credit score models submitted in response to the solicitation.