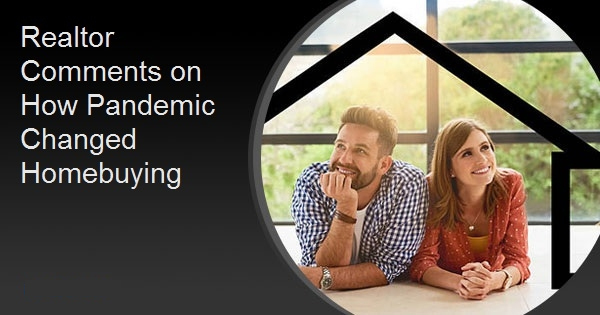 There was apparently a certain profile of home buyers before the pandemic struck and a different one after it began. The National Association of Realtors'® (NAR's) 2020 Profile of Home Buyers and Sellers, an annual report on demographics, preferences and experiences of buyers and sellers across America shows COVID-19 caused several shifts in America's housing market over the past eight months. Changes in the behaviors of home buyers and sellers were especially notable as buyers' usual tendencies altered, and the urgency to sell accelerated.

"The coronavirus without a doubt led home buyers to reassess their housing situations and even reconsider home sizes and destinations," said Jessica Lautz, vice president of demographics and behavioral insights at NAR. "Buyers sought housing with more rooms, more square footage and more yard space, as they may have desired a home office or home gym," she added. "They also shopped for larger homes because extra space would allow households to better accommodate older adult relatives or young adults that are now living within the residence."

NAR found that buyers who purchased after March were more likely to relocate to the suburbs and were more likely to pay more for that home, no matter its location, paying an average of $339,400 compared to $270,000 for those who purchased before April. Those who bought during the pandemic expect to live there 10 years while those who bought earlier plan a 15-year tenure.

While completing a transaction on-line is still rare, the percentage of buyers who bought without physically seeing the home ticked up from 3 percent before the pandemic to 5 percent afterward. The post pandemic buyers were less likely to be denied by a lender - 2 percent compared to 5 percent. The later closing group also had higher household incomes - $100,800 compared to $94,400.

Lautz notes that sellers tended to accelerate their transactions once the crisis started. "So many sellers were eager to get out of their old home and move to something bigger that would better meet their needs during quarantine," she said. Those who closed in April or later were more likely to sell because their home was too small - 18 percent compared to 13 percent of those before April.

Sellers after March were more likely to use incentives to help sell their home and received a fractionally lower price; 98 percent of the list price compared to 99 percent for those before April. However, those homes sold after March ultimately had higher selling prices - $300,000 compared to $270,700 for earlier sales.

Fifty-six percent of homeowners who sold after March sold in the suburbs, compared to 48 percent who sold before April.

Pandemic aside, the survey revealed a ton of other buyer and seller data.

The survey also looked at how home buyers paid for their new homes. Eighty-seven percent financed their purchases, largely unchanged from previous years. The 12 percent median overall down payment was unchanged from 2019, but the number inched up from 6 percent to 7 percent for first-time buyers. The median down payment for repeat buyers was 16 percent.

Lower down payments for buyers can be attributed to steadily increasing home prices, according to Lautz. "Because there's a shortage of housing inventory, we're seeing prices jump too fast," she said. "These rising costs make it that much more difficult for buyers to save for a down payment and more challenging for first-time buyers to enter the marketplace."

Student loan debt was the primary barrier for those who had trouble saving for a down payment, with the average home buyer carrying $30,000 of such debt. Twenty-six percent of first-time buyers used a gift or loan from family or friends to help with their down payment, down from 33 percent last year.

NAR conducted its survey by mail in July among a random sample of recent home buyers and sellers. A total of 8,212 responses were received.