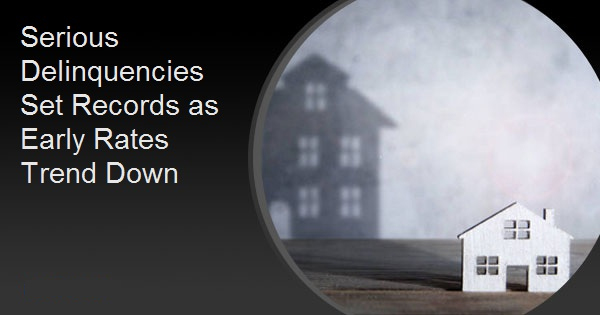 Extremely serious delinquencies, those loans 150 days or more past due, reached historically high levels in August. Five months into the COVID-19 crisis, Corelogic said the rate of delinquencies among those loans spiked to 1.2 percent, the highest level since at least January 1999, which we assume is the limit of the company's records. CoreLogic said this surge was likely due to large volumes of delinquencies moving in tandem through the pipeline.

Dr. Frank Nothaft, chief economist at CoreLogic said, "This was the highest rate in more than 21 years and double the January 2010 peak during the home-price bust. The spike in delinquency was all the more stunning given the generational low of 0.08 percent in March and April."

Loans meeting the more traditional measure of serious delinquency, 90 or more days past due including loans in foreclosure, now include 4.3 percent of active mortgages, up from 1.3 percent in August 2019. This is the highest serious delinquency rate since February 2014.

The company's August Loan Performance Insights reports that forbearance provisions and foreclosure moratoriums have helped keep foreclosure inventories at historic lows. The share of mortgages in some stage of the foreclosure process in August was 0.3 percent, down from 0.4 percent a year earlier and the lowest since, again, at least January 1999.

Homeowners nearing the end of the first 180-day grace period (afforded to borrowers with federally backed mortgages) can request an extension of an additional 180 days, which is keeping foreclosure rates low while serious delinquency continues to climb, the report said. However, back-mortgage payments continue to add up for those unable to exit forbearance periods early. Looming unpaid mortgage payments, paired with sharp declines in income for many families, point to a potential wave of home sales triggered by financial distress in 2021 as forbearance periods end.

The upshot is that the national delinquency rate, all mortgages 30 or more days past due including loans in foreclosure, was at 6.6 percent in August. This represents a 2.9-percentage point increase in the overall rate compared to the August 2019 rate of 3.7 percent.

CoreLogic also looked at the Transition Rate. In August 2020 0.9 percent of loans transitioned from current to 30 days past due compared to 0.8 percent which did so in August 2019. The transition rate has slowed since April 2020, when it peaked at 3.4 percent.

Among metro areas, the greatest annual increase, 10.1 percentage points, was in Odessa, Texas, which has been hard hit by job losses in the oil and gas industry. Other metro areas with significant serious delinquency increases included Midland, Texas, (7.9 points), Kahului, Hawaii (7.6 points) and Miami (7.0 points). Dubuque, Iowa, was the only metro area with an annual decline. Its delinquency rate was down 1.5 percent