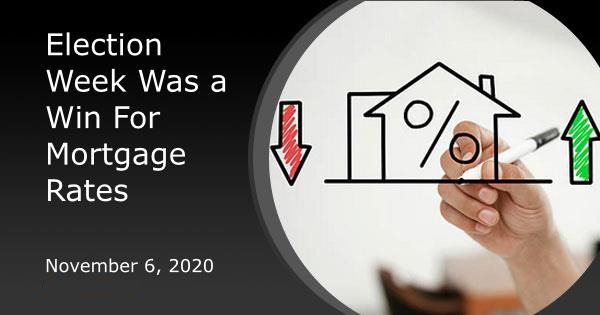 Election Week Was a Win For Mortgage Rates

Heading into the presidential election, there were significant risks for mortgage rates and a wide range of potential outcomes. We knew there would be volatility either way, and we were right!

Volatility goes both ways.  Heading into the election, the bond market (the biggest driver of interest rates) was defensive.  That means rates (aka bond yields) were heading higher.  Shortly into election night, however, yields began to drop precipitously.  It wasn't until Friday that a strong jobs report and a few additional political developments brought some weakness back to bonds.

Why are bonds moving the way they're moving?  The consensus is that a democratic sweep would have resulted in the guarantee of bigger stimulus in January and more spending in general.  In turn, government bonds would be used to pay for that stimulus.  The higher the issuance of government bonds, the more upward pressure on bond yields/rates, all other things being equal.  Moreover, if that stimulus proved effective in helping the economy bounce back, it would only add to the upward rate pressure (stronger economy = higher rates).

With that in mind, it wasn't the Biden vs Trump narrative that ultimately moved markets as much as the fact that Republicans looked set to keep control of the Senate.   Incidentally, some of the rise in rates seen on Friday had to do with Fresh speculation that Georgia's run-off elections could still change the balance of power in the Senate by January.

In other words, we're still not totally out of the woods with respect to politics putting upward pressure on rates.  Perhaps that's why 10yr Treasury yields opted to remain inside their prevailing trend.  Or maybe this is simply the slow, steady course leading back from deepest depths of pandemic-driven fear and uncertainty.  While it's true that covid case counts are spiking, it's also true that the economy is doing a better job of keeping doors open this time around.

Of course things could change at any moment if the current covid surge begins taking a new and obvious economic toll.  Along with election-driven uncertainty, this could help explain why stocks have been consolidating for months and why the negative trend in rates has yet to break the longer-term sideways range.

The silver lining to all of the above is the fact that mortgage rates aren't operating under exactly the same set of rules as the broader bond market.  They were slower to drop at the start of the pandemic, and they've been catching up in a carefully controlled pace as lenders ensure they're not overwhelmed by new applications.  That means mortgage rates haven't risen as much as Treasury yields over the past 3 months.

Heading into the election, mortgage lenders were understandably cautious, however.  For the first time in a long time, they raised rates more than the bond market suggested.  Fortunately, when bonds weathered the storm, the mortgage market lowered its defenses in grand fashion, making for the best 2-day move we've seen in weeks.

The discrepancy in the chart above (green and black lines moving in different directions recently) has most to do with purchase vs refinance loans.  Refis got hit by the new adverse market fee in August.  The fee was then delayed until Dec 1st.  That caused some confusion for consumers because the Dec 1st deadline refers to the "delivery date" for the loans in question--a milestone in the loan process that occurs 2-4 weeks AFTER closing.

Bottom line, if it's a conventional refinance that's not already locked and in process, it's getting hit by the fee.  There are limited exceptions for lower loan amounts and certain programs geared toward first time homebuyers.  Purchase rates, on the other hand, are indeed in line with all-time lows for many lenders.