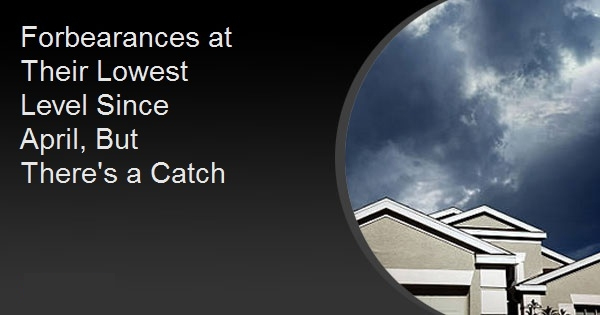 Forbearances at Their Lowest Level Since April, But There's a Catch

Another round of expirations reduced the number of active forbearance plans last week. Black Knight said the number of homeowners in COVID-19 related plans fell by 137,000 during the week, after a slight uptick the week before.  The 5.0 percent improvement was about what was expected for the first week of the month.

Black Knight's current report, covering the week ended November 3, found 2.86 million active plans, representing about 5.4 percent of all mortgages and $584 billion in unpaid principle. This was the lowest number of plans since mid-April.

The largest declines were among GSE loans. The combined Fannie Mae/Freddie Mac portfolios have 57,000 fewer plans than at the beginning of the week. The number of those loans remaining in plans is 1.035 million or 3.7 percent of those loans. Loans serviced for portfolio lenders and private label securities (PLS) was reduced by 52,000 to 695,000 or 5.3 percent and FHA/VA plans now number 1.126 million (9.3 percent) after a 43,000-loan decline.

GSE forbearance continue to see the strongest rate of improvement, down 48 percent from the peak in May. Portfolio/PLS loans have fallen 44 percent and FHA/VA loans 27 percent from their earlier peaks.

The change in the numbers of forborne borrowers represented 225,000 removals from the rolls, and 87,000 starts, the largest volume since April. However, 57 percent of those starts were renewals; people who had been in forbearance, exited, and have now returned. Black Knight notes that both starts and restarts are trending higher While the restarts may be partially a reversal of the sharp drop in plans in early October that was thought to be partially due to a lack of contact between servicers and homeowners, it is still worth watching.

There were 135,000 plan extensions during the week. Some 80 percent of currently active forbearance plans have had their terms extended at some point since March, while 20 percent remain in their initial term.