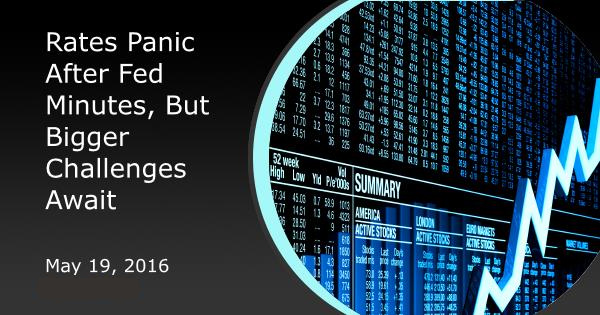 Several recent speeches from Fed officials have expressed some bewilderment over the discrepancies between market-based forecasts of the Federal Funds Rate and the Fed's own communications.  In other words, markets were saying the Fed was all bark and no bite with respect to hiking rates.

The Fed took this week as an opportunity to show its teeth.  This began on Tuesday with two speeches from Fed Presidents not known for fringy viewpoints.  They both were clear in saying that the very next Fed meeting was a "live meeting" in terms of rate hike potential.  Later that same day, the buzz on Wall Street was that the speeches were part of an effort to prepare markets for the following day's release of the Minutes from the last Fed meeting.

Markets often look to the Minutes for clarity on the Fed's stance when the actual announcement is ambiguous.  In this case, that was the late April Announcement.  Investors were worried the Fed would overtly signal a June rate hike.  When they didn't, rates fell.

Not only have rates generally been falling since then, but traders have been betting on extremely small chances of a Fed hike in June--so small, apparently, that the Fed wanted to bring everyone back on the same page.  With the June rate hike probability now over 30% compared to under 5% last week, you could certainly say they accomplished that goal.

It wasn't complicated either.  In addition to the plain language in Tuesday's speeches, Wednesday's Minutes quite simply said that "many" at the Fed saw June as an appropriate time to hike.

The news hit a market that was already moving toward higher rates.  In the following chart, it's easy to see the growing anxiety about the Fed's message as 2yr Treasury yields began rising much more quickly than 10yr yields (2yr Treasuries are a better proxy for Fed rate hike probability). 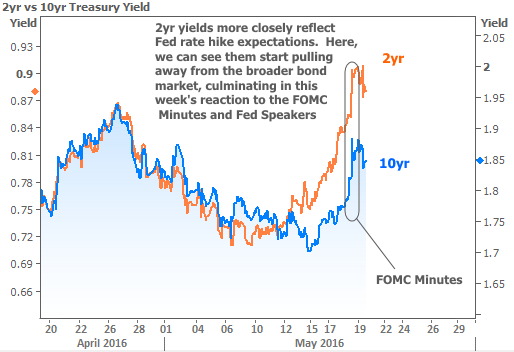 Even with the losses seen in the first half of the week, Wednesday still managed to be the worst day for mortgage rate movement since early February.  Unfortunately, this was NOT reflected in Freddie Mac's weekly rate survey (which receives most responses before the time that the Fed Minutes were released), but it certainly will be next week.

In 2016's frame of reference, rates have moved back to the top of their consolidation trend.  That's just a fancy word for a "narrowing range of rates."  When highs are getting lower and lows are getting higher, they'll eventually collide and force rates to pick a direction.  There is usually some extra momentum behind that 'breakout' move.

But when this particular consolidation breaks down, it's only the beginning of a much, MUCH bigger version of the same trend--one with farther-reaching implications.  The following chart is of 10yr Treasury yields, but they are a good proxy for mortgage rate momentum.  Bottom line: the next break will set us up either to challenge all-time lows or to move significantly higher. 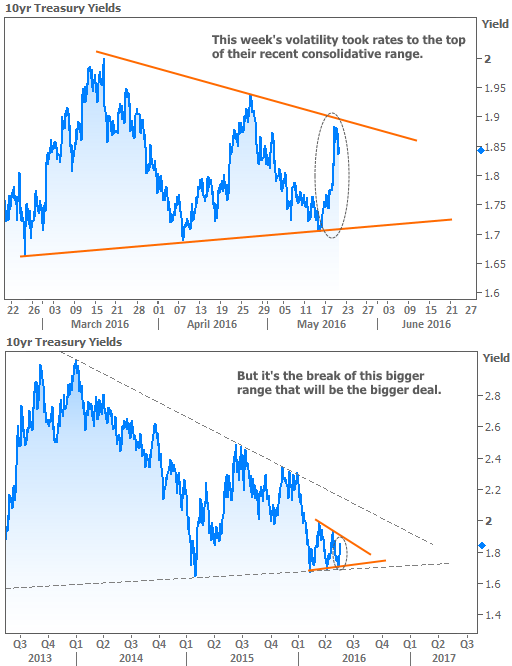 Housing-specific news ranged from uneventful to upbeat this week, with at least one of the reports allowing for a sigh of relief.   March's Residential Construction numbers (aka "Housing Starts") were pretty bad--capping a 4 month slide to the weakest levels since last October.  April's numbers (released this week) not only got the data back on track, but also revised March's Housing Starts into slightly better territory.  All told, construction remains steady near post-meltdown highs.

Despite the improvement in construction numbers, the index that measures builder confidence in the new home market was unchanged in May for the fourth straight month according to the National Association of Home Builders (NAHB).

The financial side of the housing market had its own equivocal data with this week's mortgage application volume holding relatively steady yet again.

In the biggest of pictures, both Fannie Mae and Freddie Mac released economic outlooks that pegged housing as a bright spot in an otherwise stagnant economy.