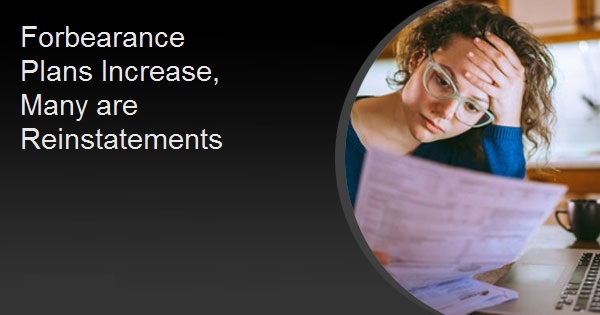 Forbearance Plans Increase, Many are Reinstatements

The number of loans in COVID-19 related forbearance plans rose during the past week, driven by both an increase in new plans and significantly fewer borrowers exiting from the program. Black Knight said its weekly survey found a net increase of 31,000 mortgage loans in forbearance plans, a 1.0 percent increase.

There were 33,000 plan starts. The number of starts through October 27 is 15 percent higher than in September. Many of those starts were borrowers reactivating previously expired plans and Black Knight said many of those were probably among the large number of plans extinguished earlier in the month. Brand new plans are down 7.0 percent month-over-month while reactivations are up 50 percent.

The 50,000 loans that were removed from the program was the smallest of any single week since the initial recovery began and there were 89,000 plans extended, the fewest in nine weeks. However, there are 365,000 plans set to expire this month so Black Knight says there could be increased levels of both extensions and removals in the coming weeks.

The net increase brought the number of active plans back over 3 million again and the share of all active mortgages in forbearance rose from 5.6 percent the previous week to 5.7 percent. These loans represent $619 billion in unpaid principal. More than 80 percent of these loans have had their terms extended at some point since March.

The GSE portion of active plans continues to decline, they fell by 1,000 last week. This leaves 1,092,000 those loans in forbearance, 3.9 percent of the Freddie Mac and Fannie Mae combined portfolios. There are 1,169,000 FHA and VA loans remaining in plans, 9.7 of those totals, and 747,000 or 5.7 percent of private label securities (PLS) or bank portfolio loans. Since last week, FHA loans saw an increase of 14,000 and portfolio/PLS loans in forbearance increased by 18,000.