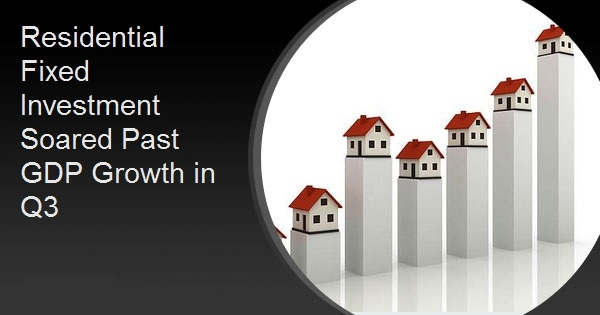 Hidden in the Q3 report on Gross Domestic Product (GDP) on Thursday, which showed a rebound of 33.1 percent from the 31.4 percent loss in Q2 was news of some real growth. Robert Dietz, chief economist of the National Association of Home Builders points out, in an article in NAHB's Eye on Housing blog, that residential fixed investment (RFI), which includes home building and remodeling, expanded at a 59.3 percent annual rate.

Dietz says low interest rates, a renewed focus on the importance of home, an evolving geography of housing demand, and a lack of inventory has spurred a "dramatic turnaround" in the housing sector since spring. This, he adds, has been a relative bright spot for the economy.

Housing's share of the GDP remains elevated. In the second quarter, amid the broader economic weakness, housing accounted for more than 16 percent of the overall number. As the rest of the economy recovered in the third quarter that share declined to 15.5 percent. Nonetheless, Dietz says, "Except for the historic second quarter, this is the highest share for housing since the summer of 2008." Housing-related activities contribute to GDP in two basic ways. The first, RFI, includes construction of new single-family and multifamily structures, residential remodeling, production of manufactured homes and brokers' fees. RFI in the third quarter represented 3.5 percent of the economy. It was at a seasonally adjusted annual pace of $642 billion measured in inflation adjusted 2012 dollars, the highest reading since 2007.

Housing's second impact on GDP is the measure of housing services. This includes gross rents (including utilities) paid by renters, and owners' imputed rent (an estimate of how much it would cost to rent owner-occupied units) and utility payments. Dietz says the imputed rent factor is necessary from an income accounting approach because, without it, increases in homeownership would result in GDP declines. For the third quarter, housing services represented 12 percent of the economy or $2.2 trillion on a seasonally adjusted annual basis. The aggregate of these two factors means a 15.5 percent share of the Q3 GDP.

FRI is the more cyclical of the two and in the third quarter its 3.5 percent share of GDP represented, as noted about, a 59.3 percent growth rate. Dietz says housing gains will continue as the consequences of the virus crisis are likely to lead to a reversal for the trend toward declining home size due to a greater need for additional home office space and more working from home.

RFI has historically averaged 5 percent of GDP and housing services between 12 and 13 percent for a combined contribution of 17 to 18 percent. However, the housing share of GDP lagged during the post-Great Recession period due to underbuilding, particularly for the single-family sector.