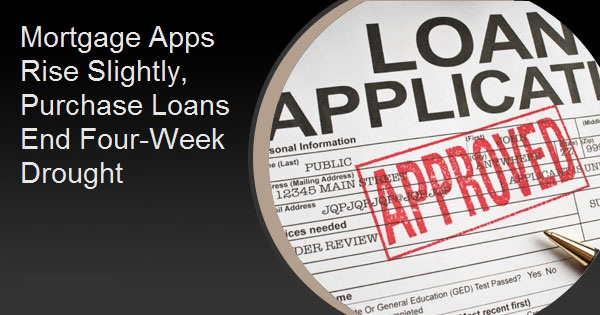 Mortgage application volume rose slightly during the week ended October 23. The Mortgage Bankers Association (MBA) said its Market Composite Index, a measure of that volume, increased 1.7 percent on a seasonally adjusted basis from one week earlier, its first increase in three weeks. On an unadjusted basis, the Index was 2.0 percent higher.

The Refinance Index gained 3 percent from the previous week's level and was 80 percent higher than the same week one year ago. The refinance share of mortgage activity increased to 66.7 percent of total applications from 66.1 percent the previous week.

The Purchase Index was up 0.2 percent on a seasonally adjusted basis. Even if fractional, it was the first uptick in that index since the week ended September 18. The Index dipped 0.3 percent unadjusted but was 24 percent higher than the same week in 2019.

"Mortgage applications to buy a home were flat compared to the prior week, but overall activity remains strong this fall. Applications jumped 24 percent compared to last year, and the average loan size reached another record high at $372,600. These results highlight just how strong the upper end of the market is right now, with outsized growth rates in the higher loan size categories. Furthermore, housing inventory shortages have pushed national home prices considerably higher on an annual basis," said Joel Kan, MBA's Associative Vice President of Economic and Industry Forecasting. "Refinance activity has been somewhat volatile over the past few months but did increase almost 3 percent last week. With the 30-year fixed rate at MBA's all-time survey low of 3.00 percent, conventional refinances rose 5 percent. However, the government refinance index decreased for the first time in a month, driven by a slowdown in VA refinance activity."

The FHA share of total applications decreased 1 percentage point to 11.7 percent and the VA share fell to 11.4 percent from 12.6 percent. The USDA share was unchanged at 0.5 percent. In addition to the record high size of purchase loans, the average size of all loans increased from $320,400 to $322,900.

Interest rates, both contract and effective, were mixed across loan types. The average contract interest rate for 30-year fixed-rate mortgages (FRM) with balances at or below the conforming limit of $510,400 decreased to 3.00 percent from 3.02 percent. Points dipped to 0.35 from  0.36 and the effective rate moved lower.

The rate for jumbo 30-year FRM, loans with balances that exceed the conforming limit, decreased to 3.28 percent from 3.33 percent while points increased to 0.31 from 0.30. The effective rate decreased.

The average contract interest rate for 30-year FRM backed by the FHA increased to 3.14 percent from 3.12 percent. Points were unchanged at 0.35 and the effective rate increased.

The average contract interest rate for 5/1 adjustable rate mortgages (ARMs) jumped to 3.05 percent with 0.64 point from 2.86 percent with 0.58 point and the effect rate increased. The ARM share of activity increased to 2.1 percent of total applications from 1.9 percent the prior week.

MBA's latest Forbearance and Call Volume Survey showed a small decline of 2 basis points in the number of loans in forbearance. A 5.92 percent share of total servicer portfolios remained in active plans in plans as of October 18. This translates to about 3.0 million loans.

"The share of loans in forbearance declined only slightly in the prior week, after two weeks of a flurry of borrowers exiting as they reached the six-month mark," said Mike Fratantoni, MBA's Senior Vice President and Chief Economist. "There continues to be a steady improvement for Fannie Mae and Freddie Mac loans, but the forbearance share for Ginnie Mae, portfolio, and PLS loans all increased. This is further evidence of the unevenness in the current economic recovery. The housing market is booming, as shown by the extremely strong pace of home sales last week. However, many homeowners continue to struggle, as the pace of the job market's improvement has waned."