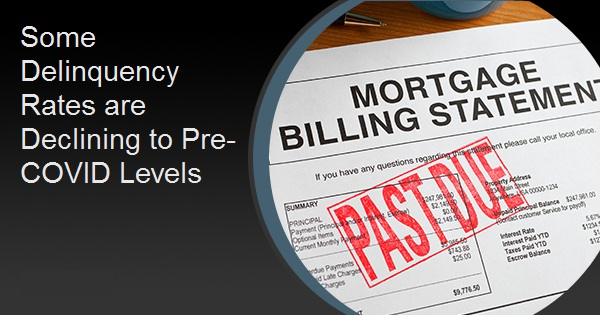 Some Delinquency Rates are Declining to Pre-COVID Levels

The number of serious delinquencies dropped in September according to Black Knight. The 43,000 decline in the number of loans that were 90 or more days past due marked the first improvement in that statistic since the start of the pandemic. The change leaves 2.32 million homeowners seriously overdue on their mortgages but not in foreclosure, 1.88 million more than in September 2019.

Black Knight's "first look" at September's loan performance data showed an overall decline in most stages of delinquency more than six months after Congress enacted loss mitigation measures to deal with the economic disruption caused by the COVID-19 virus. Total delinquencies declined 3.10 percent from August although again they were 89.03 percent higher on an annual basis. There were 3.54 million mortgages that were 30 or more days past due but not in foreclosure, down 137,000 from August. The national delinquency rate was 6.66 percent compared to 6.88 percent the previous month.

Early-stage delinquencies continue to show strong improvement, with rolls from current to 30-days delinquent, as well as the number of borrowers less than 90 days delinquent, having returned to pre-pandemic levels

The foreclosure inventory, loans in process of foreclosure, dropped by 6,000 and was down by 71,000 from a year earlier to 181,000. In addition, foreclosure starts numbered only 4,500 during the month, nearly a 90 percent year-over-year decline. The CARES Act mandated a suspension of foreclosure activity, likely resulting in these low numbers.

Mortgage prepayments pulled back in August but resumed the recent high level of activity. September's single month mortality (SSM) rate jumped above 3 percent (3.04 percent) for the first time in more than 16 years. Black Knight said the high rate is fueled by record low rates and an elongated home buying season.

The company will provide a more in-depth review of this data in its monthly Mortgage Monitor report which will be published on November 2.