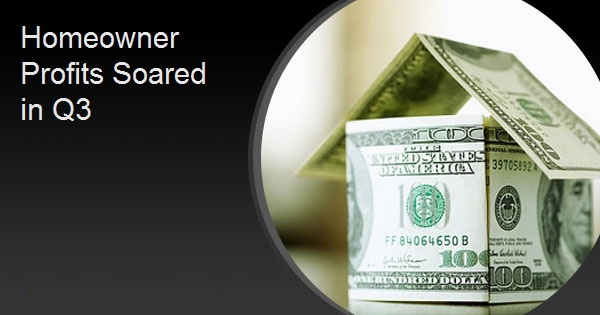 The contribution made to household wealth by homeownership is underlined in ATTOM Data Solutions' third-quarter U.S. Home Sales Report. The company said that a typical homeowner who sold a home during the quarter had a gain of $85,000. This was $10,000 more than that realized by sellers in the previous quarter and up from $66,000 in the third quarter of 2019.

This typical home-sale profit represented a 38.6 percent return on investment (ROI) compared to the original purchase price. The typical ROI in the previous quarter was 37.5 percent and it was 33.7 percent a year ago.

The report says that both the raw-profit and return-on-investment figures were the highest since the U.S. economy began recovering from the Great Recession in 2012. They represent a continued increase even as the Coronavirus pandemic has damaged the economy and led to spikes in unemployment throughout the country this year.

"Things remain in flux, given the significant uncertainty about when the pandemic might recede or what impact the recent resurgence could have in different areas of the country. But with mortgage rates at rock-bottom levels and declining supplies of homes for sale, conditions remain in place for continued strong prices and returns."

The profit margins (difference between purchase and sales prices) were up year-over-year in 89 of the 103 metropolitan areas tracked by ATTOM. (Areas were included if they had at least 1,000 single-family home and condo sales during the quarter.) The largest increases were in the midsection of the country - larger cities in Missouri, Ohio, and Indiana. St. Louis, for example, saw profits margin rise to 37.1 percent from 22.4 percent. In Columbus, Ohio they jumped from 37.1 percent to 51.6 percent.

The 14 areas that posted declines were in large coastal or tourist areas. The largest were in Honolulu (down from 43.9 percent to 35.1 percent) and San Francisco (down from 71.3 percent to 64.5 percent).

Rising profits are, of course, largely driven by price gains and, despite the economic fallout from the Coronavirus pandemic, prices did continue to climb nationwide. They tied with or set new peaks in 95 percent of the metro areas. The biggest year-over-year increases in median home prices came in the metro areas of Bridgeport (up 29.7 percent), Detroit (27.4 percent), New Haven, CT (20.1 percent), Birmingham (19.7 percent), and Indianapolis (19.3 percent).

Another factor in rising profits margins is the length of time the home is owned and homeowners who sold in the third quarter of 2020 had owned their homes an average of 8.13 years. This is up from 7.76 years in the second quarter and 7.91 a year earlier and is the longest average tenure since 2000.

All-cash purchases were only slightly higher than the previous quarter's 20.5 percent share, the lowest since 2007. The third quarter share, 21.6 percent of residential sales, was down from 24 percent a year earlier.

Institutional investors nationwide accounted for just 1.7 percent of all single-family home and condo sales in the third quarter of 2020, up from the 20-year low point of 1.6 percent in the second quarter of 2020, but down from 3.4 percent a year ago. Institutional investors were most active in Arizona, Georgia, and Nebraska, but shares in each case were below 4 percent.

Nationwide, buyers using Federal Housing Administration (FHA) loans accounted for 11.8 percent of all single-family home and condo purchases in the third quarter, down from 13 percent in the previous quarter and from 12.2 percent a year ago. The highest share of FHA buyers during the quarter were in three Texas cities, McAllen, Beaumont, and El Paso. Shares ranged from one-third of sales down to 26.3 percent.