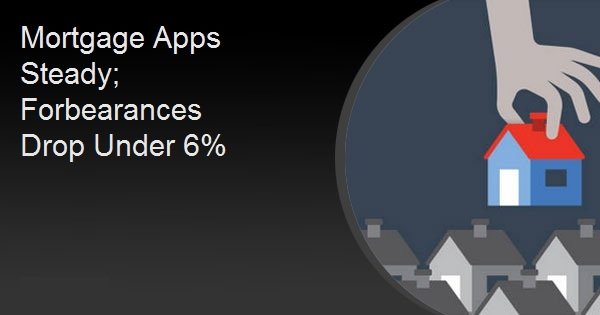 The Mortgage Bankers Association (MBA) says there was little change in mortgage application activity during the week ended October 16. MBA's Market Composite Index, a measure of mortgage loan application volume, dipped 0.6 percent from the prior week on a seasonally adjusted basis and was down 1.0 percent unadjusted.

Refinancing was also flat. The Refinance Index increased 0.2 percent from the previous week although activity remained well ahead of a year earlier, up 74 percent. The refinance share of mortgage activity increased to 66.1 percent of total applications from 65.6 percent the previous week.

Applications for home purchasing fell for the fourth straight week, and for the seasonally adjusted index it has consistently been a 2.0 percent weekly decline. The unadjusted index was also down by 2.0 percent but was 26 percent higher than the same week one year ago.

"Mortgage rates increased last week, with the 30-year fixed rate climbing 2 basis points to 3.02 percent - the highest since late September. Despite the uptick in rates, refinance activity held steady, with FHA refinance applications posting a 17.6 percent increase, helping to offset declines in the other loan types," said Joel Kan, MBA's Associate Vice President of Economic and Industry Forecasting. "Homebuyer demand remains strong this fall, but purchase applications did decrease 2 percent, with both conventional and government purchase activity taking a step back. Given the ongoing housing market recovery and low rate environment, both purchase and refinance applications remained robust compared to a year ago, rising 26 percent and 74 percent, respectively."

Both contract and effective rates increased slightly across all mortgage types except FHA-backed 30-year loans. The average contract interest rate for 30-year fixed-rate mortgages (FRM)  with conforming loan balances of $510,400 or less increased, as Kan noted to 3.02 percent from 3.00 percent. Points increased to 0.36 from  0.32.

The FHA 30-year FRM remained flat at 3.12 percent with 0.35 point. The effective rate was also unchanged.

The average contract interest rate for 5/1 adjustable rate mortgages (ARMs) increased to 2.86 percent from 2.63 percent, with points unchanged at 0.58. The ARM share of activity decreased to 1.9 percent of total applications from 2.0 percent.

"The share of loans in forbearance declined across all loan types, primarily because of borrower forbearance plans expiring at the six-month mark. Federally backed loans under the CARES Act are eligible to be extended for up to 12 months, but borrowers must contact their servicer for an extension. Without that contact, borrowers exit forbearance, whether they are delinquent or current on their loan," said Mike Fratantoni, MBA's Senior Vice President and Chief Economist. "Borrowers with federally backed mortgages should contact their servicer if they still have a hardship due to the pandemic."

Added Fratantoni, "The steady improvement for Fannie Mae and Freddie Mac loans highlights the improvement in some segments of the job market and broader economy. The slower decline for Ginnie Mae loans continues to show that this improvement has not been uniform, and that many are still struggling to regain their footing."