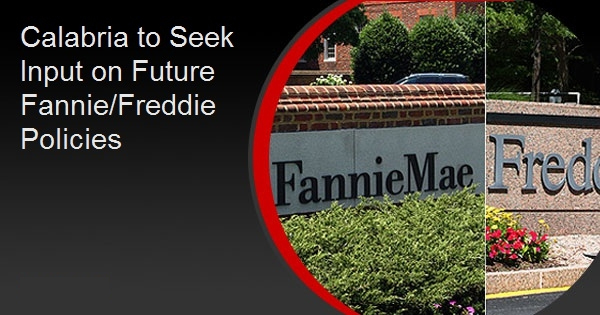 Mark Calabria, director of the Federal Housing Finance Agency (FHFA) used the annual convention and expo of the Mortgage Bankers Association to announce changes in the agency's requirements for certain operations of the government sponsored enterprises (GSEs) Fannie  Mae and Freddie Mac.

FHFA is seeking comments on a proposed rule requiring the GSEs to provide advance notice to FHFA of new activities and to obtain prior approval before they launch any new products. The rule establishes revised criteria for determining if such notice is required and determining if an activity is a new product that merits public notice and comment.

In a press release that accompanied Calabria's announcement at the virtual MBA event, the agency said it is obligated to ensure Fannie and Freddie stay focused on their core mission and do not stray into business the market already serves well. "This rule will help clarify the post-conservatorship housing finance market. And it will establish a process that allows stakeholders and the public to remain engaged in shaping the future of the housing finance market as it develops."

Calabria said the proposed rule, which will also outline the review process and timelines for approving a new product "is an important step as the Agency works to end the Enterprises' conservatorships."

The Housing and Economic Recovery Act of 2008 requires Fannie and Freddie to provide FHFA with such notices and FHFA issued an interim final rule implementing these requirements in 2009, but the rule has been little used during the conservatorships. FHFA's proposal retains the key concepts from the 2009 rule, while clarifying the definitions of new activities and products.

The review process only needs to occur once for each approved new product. For example, Fannie can offer a new product that is identical or substantially similar to one approved for Freddie - or vice versa.

Calabria assures MBA members that the process will give stakeholders reliable, transparent opportunities to comment on new developments at the GSEs. "This is especially important when Fannie and Freddie are pursuing new lines of business," he said.

The Director recapped the agencies response to the COVID-19 national emergency and thanked MBA members for their assistance. "You have helped millions get into forbearance plans. Now, you are helping many who are ready to get back to paying their mortgage. And throughout it all, you have continued underwriting the good loans that make homeownership both affordable and sustainable." FHFA, he said,

Calabria said his agency's actions have helped homeowners, renters, and the housing market deal with this crisis, but at a cost, at least $6 billion. That is $4 billion in loan losses from projected forbearance defaults, $1 billion in losses from the foreclosure moratorium, and another $1 billion in forbearance expenses. These figures could be even higher depending on the path of the economic recovery.

"To cover these projected losses, starting December 1, the Enterprises will be adding an adverse market fee of 0.5 percent to some refinance acquisitions," he said. The fee has been tailored to ensure low-income borrowers can continue accessing record-low rates to reduce their monthly mortgage payments and borrowers with loan balances of $125,000 or less are exempted from the fee. Nearly half of these are at or below 80 percent of area median income. Also exempt are affordable refinance products, Home Ready and Home Possible. Calabria said it is important to recognize that Congress has not provided the Enterprises any funding to offset the costs of these policies.

The fee was originally scheduled to go into effect September 1. But after listening to the feedback, FHFA delayed implementation until December 1. This recognizes that Congress may take the opportunity to review alternatives.

Calabria noted that, while most financial institutions are required to maintain reserves of loss-absorbing capital exactly for situations like this, Fannie and Freddie were required for years to send almost every penny of their loss-absorbing capital to the U.S. Treasury. "As a result, when I walked in the door at FHFA, Fannie and Freddie were leveraged about 1,000 to 1. If the Enterprises had still been leveraged 1,000 to 1, they would have already failed in response to COVID. On the other hand, if Fannie and Freddie had more capital when COVID hit, they would have been able to provide even more support." Calabria did not mention that the sweep of profits he referenced was ended by his predecessor.

Prior to the housing crash the biggest players in the market received special treatment, like guarantee fee discounts, because of their size and volume, but these are also the players who have access to capital markets. Therefore, last year FHFA put an end volume-based discounts, variances, and exceptions at Fannie and Freddie. Small lenders must have access to the secondary market at terms equitable with larger players.

The Director said, "We are looking at every rule and regulation to ensure that we are creating that level playing field across the industry." But, he added, there is more needed to ensure the stability of housing finance markets. In particular, the GSEs must build capital.

"Fannie and Freddie's combined leverage ratio is now down to roughly 250 to 1. This is certainly better than 1,000 to 1. But it is not close to safety and soundness. In their current condition, Fannie and Freddie will fail in a serious housing downturn." This past May, FHFA released a re-proposed regulatory capital framework for the GSEs. This is a critical step toward ensuring that the Enterprises can support sustainable homeownership throughout the economic cycle.

As to that last criteria, he noted that borrower debt-to-income has been one of the strongest predictors of forbearance and data also shows that a major driver of today's racial homeownership gap is that minority households went into the 2008 crisis with extremely high levels of leverage. From 2001 to 2005, African American and Hispanic mortgage borrowing increased 78 and 116 percent, respectively. But from 2005 to 2015, the number of minority borrowers plummeted by 63 percent.

Minority households lost significant amounts of wealth because of the housing market collapse. Between 2007 and 2010, household wealth declined 31 percent for African American families and over 40 percent for Hispanic families.

This experience demonstrates that the benefits of owning a home require homeownership to be both affordable and sustainable. FHFA's job is to ensure the Enterprises support both.

He concluded, "FHFA is implementing regulatory reforms that prepare the Agency and the Enterprises to operate effectively outside of the conservatorship framework. Our goals are to cement FHFA as a world-class regulator and ensure Fannie and Freddie are first-in-class in corporate governance and risk management."