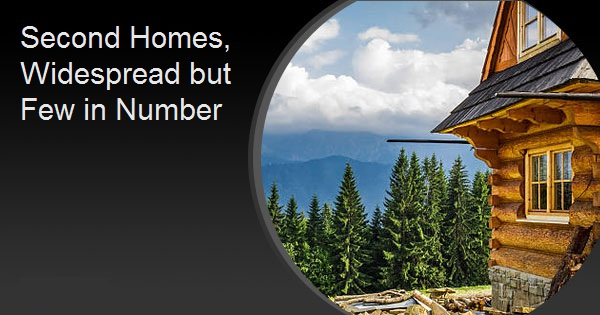 There were approximately 7.5 million second homes in the U.S. in 2018, the most recent year for which data is available. This is 5.5 percent of the nation's total housing stock. Na Zhao, writing in the National Association of Home Builders (NAHB's) Eye on Housing blog, says the largest share of these homes are in Florida with a total of 1.1 million homes, 14.5 percent of the country's total. The fewest homes, only 20,000, were in South Dakota

NAHB defines a second home as one that qualify for the home mortgage interest deduction using the Census Bureau's 2018 American Community Survey (ACS). This does not include houses held primarily for investment or business purposes nor does it include homes under construction.

Half of the nation's second homes can be found in nine states: Florida, California, New York, Texas, Michigan, North Carolina, Arizona, Pennsylvania, and Wisconsin, but second homes are not restricted to locations like ski resorts or beachfront areas. There were 932 counties in 49 states where at least 10 percent of the housing stock were second homes and 384 counties with concentrations of 20 percent or more. The only state that lacked a county with a 10 percent concentration was Connecticut. This was true of the District of Columbia as well.

In 35 counties in 17 states second homes account for one-half of the housing stock. Six of these are in Michigan, five are in Colorado and four are in Wisconsin. The distribution of shares by county is shown in the map below.