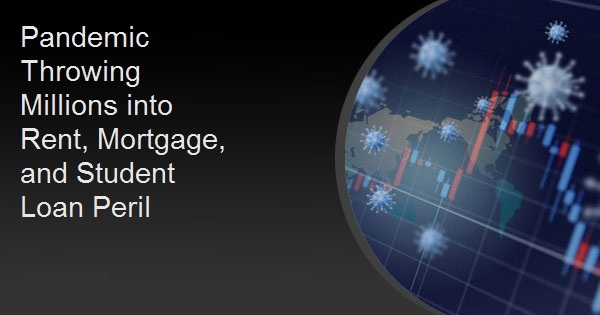 The pandemic is endangering the credit histories of at least 30 million Americans and possibly threatening the shelter status of many of them. The Mortgage Bankers Associations' (MBA's) Research Institute for Housing America (RIHA) said on Friday that over 6 million households missed making rent or mortgage payments in September and 26 million individuals did not make payments on their student loans.

The number of missed payments for rent and mortgage payments did decline slightly from the second quarter but 2.82 million households failed to pay their rent on time and in full in September while 3.37 million homeowners missed, delayed, or made a reduced mortgage payment. These numbers represent 8.5 percent of the renter population and 7.1 percent of homeowners. The share of student debt borrowers who missed a monthly payment has remained at 40 percent since May.

"Rent and mortgage payment collections improved over the summer as more people went back to work, but high unemployment continues to place hardships on millions of U.S. households. There is growing concern that absent a slowdown in the number of coronavirus cases and another round of much needed federal aid, millions of households in the coming months face the prospect of falling further behind," said Gary V. Engelhardt, Professor of Economics in the Maxwell School of Citizenship and Public Affairs at Syracuse University. "With the current eviction moratorium expiring in January, the situation could be even more challenging for renters. Many renter households across the country could find themselves with no place to live and no means to repay missed payments."

Added Engelhardt, "The tens of millions of student debt borrowers behind on their payments also has future ramifications for the housing and mortgage markets. Borrowers ending up in default would see an adverse effect on their credit, in turn making it potentially more challenging for them to rent or qualify for a mortgage."

The RIHA study is based on an internet survey of an 8,000-household panel. It was designed specifically to study the pandemic's financial effects by following the same set of households from before the outbreak to the end of September.

The survey found that the number of renters receiving unemployment insurance (UI) benefits rose from 3 percent at the beginning of April to 7 percent by the end of September while the percentage of homeowners remained unchanged at 3 percent. The number of student debt borrowers receiving UI payments has jumped from 3 percent to 8 percent over that period.

Student debt borrowers were most likely to have missed a payment over the two quarters; 16.2 percent had missed one. 8.8 percent missed two payments, 7.0 percent missed three, and 22.7 percent missed four or more. An aggregate of 34.4 million borrowers have missed at least one loan payment since the pandemic began (40 percent of borrowers each month) and the missed payments may have total as much as $29.5 billion in the third quarter.

Edward Seiler, Executive Director of RIHA and MBA's Associate Vice President, Housing Economics said, "This study reveals the financial distress that many households continue to experience and highlights the need for all stakeholders to come together to provide meaningful solutions to those who will need it most in the coming months."