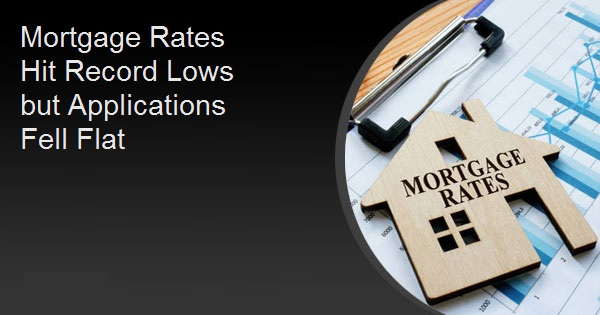 The volume of mortgage applications dipped slightly last week. The Mortgage Bankers Association (MBA) said its Market Composite Index, a measure of that volume, was down 0.7 percent on a seasonally adjusted basis during the week ended October 9 and was 1 percent lower on an unadjusted basis.

The Refinance Index slipped 0.3 percent from the previous week and was 44 percent higher than the same week one year ago. The refinance share of mortgage activity increased to 65.6 percent of total applications from 65.4 percent the previous week.

The seasonally adjusted Purchase Index decreased 2 percent from one week earlier and 1 percent unadjusted. The Index was 24 percent higher than the same week one year ago, continuing a string of year-over-year gains that started during the week ended May 22.

"Mortgage applications for refinances and home purchases both decreased slightly last week, despite the 30-year fixed mortgage rate declining to a new MBA survey low of 3.00 percent. Applications for government mortgages offset some of the overall decline by increasing 3 percent, driven by a solid gain in government purchase applications and an 11 percent jump in VA refinance applications," said Joel Kan, MBA's Associate Vice President of Economic and Industry Forecasting. "Refinance and purchase activity continue to run well ahead of last year's pace, fueled by record-low rates and strong homebuyer demand. Housing supply is a challenge for many aspiring buyers, but activity should continue to stay strong the rest of the year."  ,

The average contract interest rate for 30-year fixed-rate mortgages (FRM) with balances at or below the conforming limits of $510,400 decreased to 3.00 percent from 3.01 percent. Points dropped to 0.32 from  0.37 and the effective rate declined.

The average contract interest rate for jumbo 30-year FRM, loans with balances exceeding the conforming limit, was 3.30 percent with 0.35 point. The previous week the rate was 3.31 percent with 0.30 point. The effective rate increased.

The average contract interest rate for 30-year FRM backed by the FHA was unchanged from the prior week at 3.12 percent. Points ticked up to 0.35 from 0.32 and the effective rate increased.

Fifteen-year FRM rates were also flat at 2.59 percent. Points declined to 0.32 from 0.36 and the effective rate moved lower.

The average contract interest rate for 5/1 adjustable rate mortgages (ARMs) decreased 17 basis points to 2.63 with points increasing to 0.58 from 0.34. The effective rate decreased from last week. The ARM share of activity decreased to 2.0 percent of total applications from 2.2 percent the prior week.

MBA's latest Forbearance and Call Volume Survey confirms the sharp decline in the number of forbearance plans that was reported late last week by Black Knight. According to the MBA report, the total number of loans in plans dropped 49 basis points to 6.32 percent of all active loans as of October 4. This leaves 3.2 million homeowners in forbearance.

"The share of loans in forbearance declined across all loan types. With the forbearance program for federally backed loans under the CARES Act reaching the six-month mark, many borrowers saw their forbearance plans expire because they did not contact their servicer. Another reason for expirations was that borrower information needed to determine an appropriate loss mitigation option was not yet in place," said Mike Fratantoni, MBA's Senior Vice President and Chief Economist. "Borrowers with federally backed mortgages need to contact their servicer to obtain another six months of reprieve if they are still impacted by the pandemic. As of now, some borrowers are exiting forbearance without making contact or without a plan in place. Servicers are making outreach efforts to attempt to work with these borrowers to determine the best options for them, including an extension."

Added Fratantoni, "On a more positive note, nearly two-thirds of borrowers who exited forbearance remained current on their payments, repaid their forborne payments, or moved into a payment deferral plan. All of these borrowers have been able to resume - or continue - their pre-pandemic monthly payments."

MBA's latest Forbearance and Call Volume Survey covers the period from September 28 through October 4, 2020 and represents 74% of the first-mortgage servicing market (36.8 million loans.)