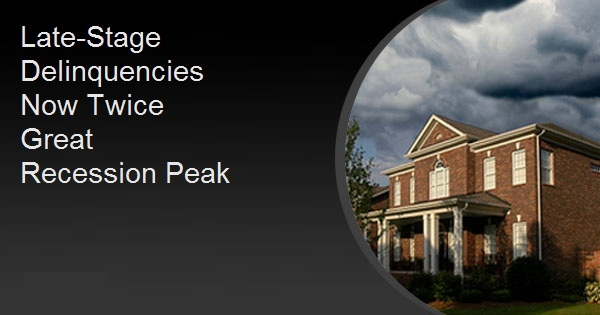 Mortgage delinquencies continued to rise in July according to CoreLogic's new loan performance report. The company found that 6.6 percent of all mortgages were at least 30 days past due (including those in foreclosure.) This represents a 2.8-percentage point increase in the overall delinquency rate compared to July 2019, when it was 3.8 percent. It was, however, a lower rate than the 7.1 percent reported for June, at that point a 3.1-point annual increase.

The improvement was in early stage delinquencies, those loans 30 to 59 days past due. They declined from 1.8 percent in July of last year after spiking in April of this year to 4.2 percent.

Further, the 120-day bucket was the highest in the 21 years CoreLogic has been tracking the data, 1.4 percent. The company said the persistent instability of the job market pushed many homeowners further down the delinquency funnel this summer. Dr. Frank Nothaft, chief economist at CoreLogic said the 120-day rate was more than double its December 2009 Great Recession peak. "The spike in delinquency was all the more stunning given the generational low of 0.1 percent in March" he said.

The foreclosure inventory, loans in some stage of the foreclosure process, is the lowest for any month in at least 21 years at 0.3 percent, down from 0.4 percent in July 2019. Most foreclosures actions are on hold due to the CARES Act.

The share of mortgages that transitioned from current to 30 days past due during the month was 0.8 percent, unchanged from the previous July. The transition rate has slowed since April 2020, when it peaked at 3.4 percent.

Home prices as measured by CoreLogic's Home Price Index (HPI) have been rising at an accelerated rate but unemployment levels in hard-hit areas remain stubbornly high, the company said, leaving some borrowers house-rich but cash poor. Despite the slow reopening of several sectors of the economy, recovery for other industries like entertainment, tourism, oil, and gas have a more uncertain outlook for the remainder of 2020. With persistent job market and income instability, Americans continue to tap into savings to stay current on their home loans. But as savings run out, borrowers could be pushed further down the delinquency funnel.