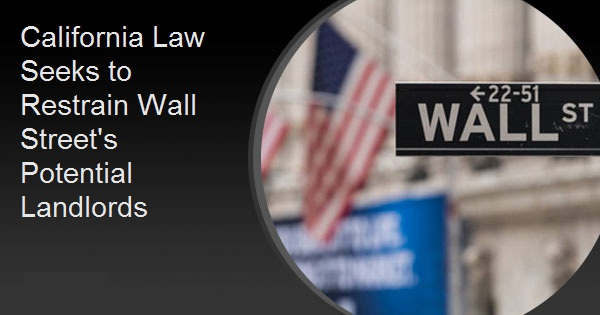 California is taking steps to avoid a repeat of the conversion of thousands of single-family homes from ownership to rental properties as occurred during the Great Recession. In late September, the state's governor Gavin Newson signed a bill that will give tenants, affordable housing groups and local governments the first crack at buying foreclosed homes.

As homes were foreclosed by the millions following the housing crisis, Wall Street stepped in and investors, according to Zillow, gobbled up over 5 million homes, turning them into rental properties. They were bought as individual homes, via bulk sales of lender real estate owned (REO), or as distressed loans upon which the investors later foreclosed.

It was expected that these houses would return to owner-occupied status once home prices recovered and the investors, largely big hedge funds, could realize a profit. Instead they have found ways to manage the geographically dispersed properties and continue to hold hundreds of thousands of them.

This has been problematic. While the investor purchases helped put a floor under home prices at a time when there was little appetite for buying distressed properties, it has continued to reduce the inventory of available homes for sale. There have also been many complaints of tenant abuses and deferred maintenance. Many of these were spotlighted last March in a New York Times Magazine article, "A $60 Billion Housing Grab by Wall Street" by Francesco Mari. We summarized her work here.

The California legislation, SB1079, was the brainchild of an activist Oakland group, Moms 4 Housing. It bars sellers of foreclosed homes from bundling them at auction for sale to a single buyer. In addition, it will allow tenants, families, local governments, affordable housing nonprofits and community land trusts 45 days to beat the best auction bid to buy the property. It also creates fines of as much as $2,000 per day for failure to properly maintain properties.

So far, the COVID-19 pandemic has not resulted in massive foreclosures due both to mortgage forbearance programs and a foreclosure moratorium put in place by the U.S. Congress's Cares Act. Still mortgage delinquencies are rising, and weekly first-time unemployment claims have remained above 800,000 since March. Most forbearance plans are due to expire by next March lacking further government action.