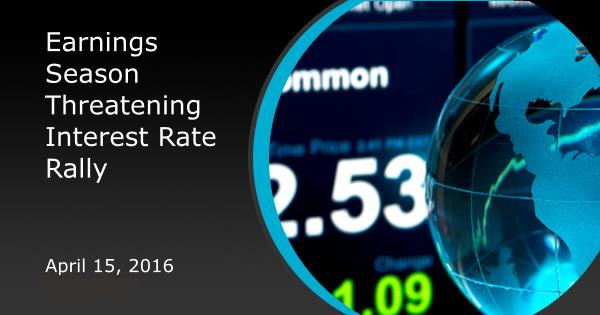 Interest rates tend to move in the same direction as stock prices, or so age-old wisdom would have you believe. It’s actually more complicated than a simple “if/then.” In fact, the following long term chart of the Dow and the 10yr yield make it look like the opposite is true! 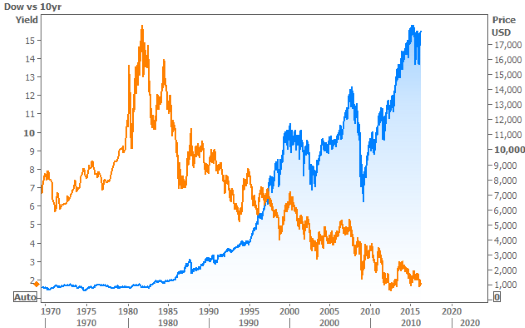 So what’s up with this seeming contradiction? On certain days, stocks and rates will be almost glued to each other. On other days, they may spike in opposite directions. The variations are quite simply due to the fact that markets find motivation in different places. When motivations align such that stocks and bonds move in the same direction, the age-old wisdom is reinforced.

One of the secrets to the longevity of this particular age-old wisdom is the “asset allocation trade.” This refers to investors allocating percentages of their portfolios between stocks, bonds, and other investments. Any time there’s a big enough liquidation in one sector, other sectors tend to benefit by default.

For instance, even if bond markets weren’t feeling too inspired, a big enough sell-off in the stock market could still create cash in search of a new home. While much of that cash simply remains cash, enough of it is put to work in bond markets to create the illusion of rates and stocks falling together (rates fall when more investors buy more bonds). In truth, bond markets are just picking up the shattered shards of a stock market that just fell off a cliff.

This concept is important right now because the stock market has been flashing warning signs that it’s approaching the biggest cliff in 7 years. One of the reasons markets are taking it so seriously is that the same exact thing happened 7 years ago, and again 7 years before that. Much of the strength in bond markets (aka “lower rates”) seen so far in 2016, can be traced to this big potential shift in asset allocation. And much of the small rise in rates earlier this week coincides with stocks attempting to break out of this gloomy pattern. 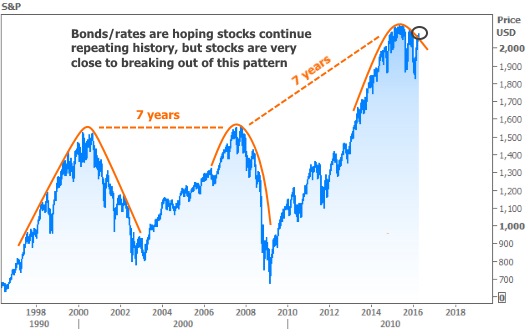 Keeping my own reminder in mind, stocks aren’t the only game in town. Oil prices have gotten a lot of attention as a market mover for interest rates recently. Oil and stocks have shared a bit of a connection, but if they were dictating bond markets, rates would be quite a bit higher right now.

Bonds’ not-so-secret benefactor has been the general global economic malaise—leveling-off growth in China, inflation/growth concerns in Europe, and the ineffectiveness of extreme monetary policy measures in Japan. We may find in retrospect that falling oil prices were just as much a symptom of that malaise as they were a result of this sudden realization of ‘oversupply’ (that’s the thesis the news focuses on).

One great proxy for global economic/inflation concerns is the European bond market. It’s the only thing in the same league as the US bond market in terms of size and liquidity. In the following chart, keep in mind that German 10yr yields (the benchmark for European bond markets) are overlaid with no shared y-axis. They’re nowhere close to US 10yr yields, with the most recent dip taking them to 0.08% vs US 10yr’s 1.68%. If near-zero rates in the largest economy in the world (Eurozone) doesn’t suggest global economic malaise, I don’t know what does. 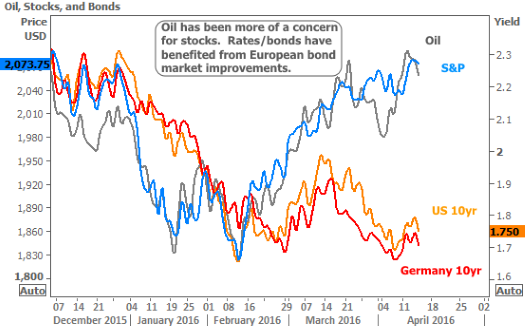 So we’re left to try and guess which of these two motivations (stocks/oil vs economic malaise) will win out when it comes to moving rates in the US. At the very least, it’s fair to be concerned that a big break higher in stocks will prompt enough asset allocation (out of bonds and back into stocks) to push rates higher short term. The reason we’ve been seeing hints of that so far is that earnings have been coming in generally better than expected. If that continues, rates may continue to stay under pressure.

From a strategy standpoint, I would say that until we see European or US bond yields make new lows for 2016, it makes more sense to approach locking/floating with a defensive stance. If 10yr yields break above the supportive ‘gap’ seen in the following chart, things could quickly get worse. 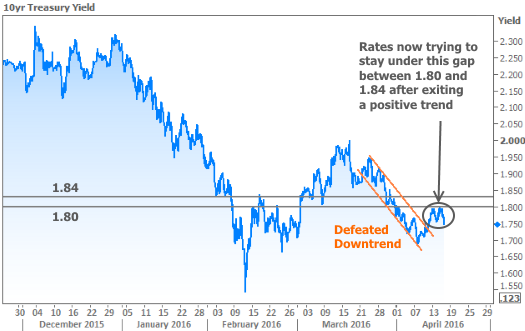 Wells Fargo & Co has agreed to pay a record $1.2 billion to resolve a dispute with the Justice Department over mortgages it falsely claimed were eligible for Federal Housing Administration (FHA) insurance.

Inaccurate property tax data from multiple sources during a home loan process was one of the most frequent complaints in the annual Consumer Mortgage Experience report.

A recent study examined the effects of neighborhoods on socioeconomic mobility. No surprise: nicer neighborhoods with better schools resulted in more advancement in life.

Mortgage lending profits improved in 2015 despite slipping in the 4th quarter as TRID was implemented.

It was a strong week for purchase and refi applications thanks to low rates and the inception of the spring homebuying season.

Long thought to be impossible, the FHFA announced it would be offering limited principal reduction opportunities on certain Fannie and Freddie loans.