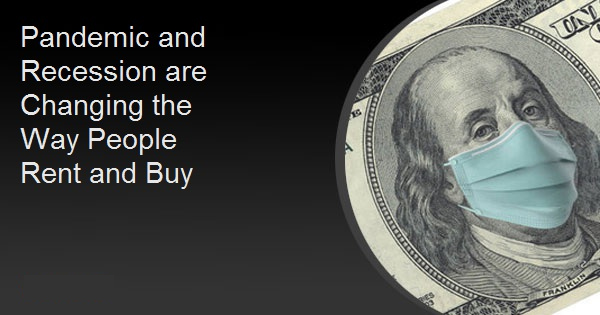 Pandemic and Recession are Changing the Way People Rent and Buy

Robert Dietz says you can count him as among those who believe the geography of housing demand is being changed by the pandemic and the resulting recession. He also thinks some of the changes will endure beyond the dual crises.

Dietz, chief economist of the National Association of Homebuilders (NAHB) says the changes aren't solely the result of what has happened this year, but a continuing evolution of the market due to already existing factors. "Declining housing affordability in high-density markets were due to limited resale inventory and insufficient levels of home building. The impact of COVID-19 on prospective home buyer concerns and preferences have accelerated these changes." He says, for example, that the virus itself is creating a competitive disadvantage for residences that require an elevator or utilize a great deal of common space.

Dietz, writing in a column in Builder says some buyers are "voting with their feet", looking to purchase outside of urban areas because of a desire for more space and worries about congestion, but also due to "wariness" of city governance and taxes. At the same time, long commutes are not the downside they used to be. Research indicates that about 20 percent of the workforce will be able to spend the majority of their time working at home and about 10 percent will be allowed to totally telecommute. This will mean they can live anywhere with a reliable internet connection.

He says the shift is already becoming apparent with rents declining in high-density, low-affordability markets like New York and San Francisco. The declining demand for urban rentals may, as indicated by NAHB's Home Building Geography Index (HBGI), be hastening the expansion of home construction in low-density markets.

The second quarter HBGI shows the best performing economic region was small metro suburbs, which had an estimated growth rate in single-family construction of almost 3 percent, the only region that posted a year-over-year gain during the quarter. The worst performance was in the set of large metro urban core counties, which recorded an almost 17 percent year-over-year decline. Large metro suburbs and exurbs had decreases of just over and just under 9 percent, respectively, while small metro core counties, cities with populations under 1 million, shrunk by 6.o percent.

Dietz says the trend isn't limited to single-family construction. The multifamily sector fared better than expected in the first half of 2020, in part due to construction in outlying areas. While large metro areas host most apartment construction, the market share for multifamily permits for large metro cores and suburbs fell from 67  to 66 percent in the second quarter alone, a significant change as market shares tend to be stable over time.

He predicts that the introduction of a coronavirus vaccine will slow these changes and return some strength to urban core rental demand, but this recession will leave lasting impacts on where Americans live and work. "Single-family housing, townhouses, and garden-style multifamily units will prove to be more resilient during a public health crisis. In turn, these changes are boosting demand for new construction in lower-density markets."