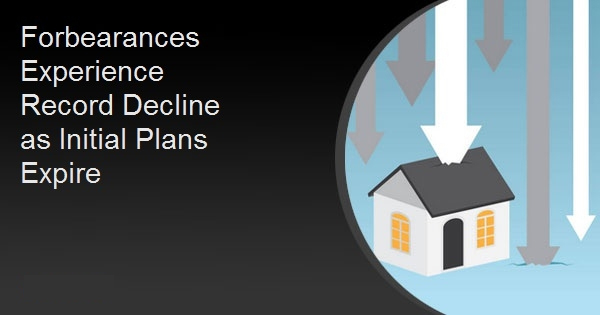 The number of forbearance plans plunged last week as those that went into effect in the early days of the pandemic hit the end of their initial six-month terms.  Black Knight said nearly one-fifth of the plans ended, as the number fell by 649,000 mortgages or 18 percent of the previous week's total. A total of 2.97 loans remain in forbearance.

It was the largest one-week decline, far outpacing the 435,000 drop when the first wave of plans hit the three-month mark in early July. It would be interesting to know how many of the formerly forborne borrowers from both waves had continued to make their monthly payments, using the plans as an insurance policy against potential financial difficulties. Such a possibility has been suggested by both ATTOM Data Solutions and the Urban Institute.

The greatest reduction in plans was among loans serviced for portfolio loans and private label securities (PLS). Those loans declined by 228,000 or 24 percent of the total. Both GSE (Fannie Mae and Freddie Mac) loans and the FHA/VA portfolios experienced downturns as well. The GSE portfolios are down by 213,000 loans or 16 percent and the FHA/VA by 208,000 or 15 percent.

As of October 6, the remaining loans in forbearance plans represent 5.6 percent of all active mortgages and together represent $615 billion in unpaid principal. Some 4 percent of all GSE-backed loans, 9.4 percent of FHA/VA loans and 5.6 percent of loans in private label securities or bank portfolios remain in forbearance plans.  About 78 percent of these loans have had their initial terms extended at some point and Black Knight says we can expect another heightened wave of expiration and extension activity through the next month as another 800,000 loans hit the end of their six-month terms.

Even at the reduced number of active plans, advances of principal and interest due to investors total $3.6 billion per month, spread fairly evenly across investor types. Another $1.3 billion is obligated for insurance and tax payments.