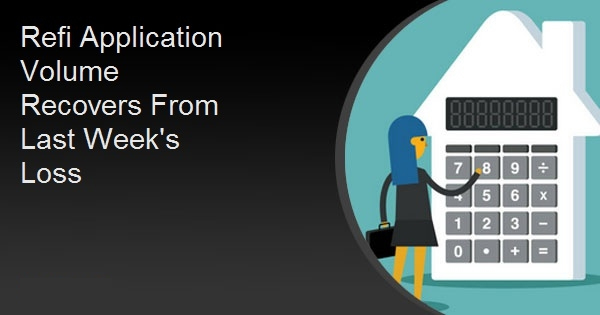 The  Mortgage Bankers Association (MBA) said the volume of purchase mortgage applications declined for a second week but refinancing more than recovered from last week's 7 percent loss. MBA's Market Composite Index, a measure of mortgage loan application volume, increased 4.6 percent on a seasonally adjusted basis during the week ended October 2 and was 5 percent higher than the prior week on an unadjusted basis.

The seasonally adjusted Purchase Index decreased 2 percent from one week earlier and was down 1 percent without an adjustment. Purchasing volume was 21 percent higher than the same week one year ago.

"Mortgage rates declined across the board last week - with most falling to record lows - and borrowers responded. The refinance index jumped 8 percent and hit its highest level since mid-August," said Joel Kan, MBA's Associate Vice President of Economic and Industry Forecasting. "Continuing the trend seen in recent months, the purchase market is growing at a strong clip, with activity last week up 21 percent from a year ago. The average loan size increased again to a new record at $371,500, as activity in the higher loan size categories continues to lead growth."

Added Kan, "There are signs that demand is waning at the entry-level portion of the market because of supply and affordability hurdles, as well as the adverse economic impact the pandemic is having on hourly workers and low-and moderate-income households. As a result, the lower price tiers are seeing slower growth, which is contributing to the rising trend in average loan balances."

As Kan said, rates declined for all loan types on both a contract and an effective basis. The average contract interest rate for 30-year fixed-rate mortgages (FRM) with balances at or below the conforming loan limit of $510,400 decreased to 3.01 percent from 3.05 percent, with points decreasing to 0.37 from  0.52.

The rate for jumbo 30-year FRM, loans with balances exceeding the conforming limit, decreased 2 basis points to 3.31 percent. Points dropped to 0.30 from 0.39.

The average contract interest rate for 5/1 adjustable rate mortgages (ARMs) decreased to 2.80 percent from 2.95 percent, with points decreasing to 0.34 from 0.55. The ARM share of activity remained unchanged at 2.2 percent of total applications.

MBA's latest Forbearance and Call Volume Survey puts the number of loans in forbearance as of September 27 at 3.4 million. The total declined by 6 basis points to 6.81 percent over the previous week.

"As of the end of September, there continues to be a slow and steady decrease in the share of loans in forbearance -driven by consistent declines in the GSE loan share - and a persistently high amount in the Ginnie Mae portfolio," said Mike Fratantoni, MBA's Senior Vice President and Chief Economist. "The significant churn in the labor market now, more than six months into the pandemic, is still causing financial distress for millions Total weekly forbearance requests as a percent of servicing portfolio volume (#) decreased elative to the prior week: from 0.11  percent to 0.08  percent.