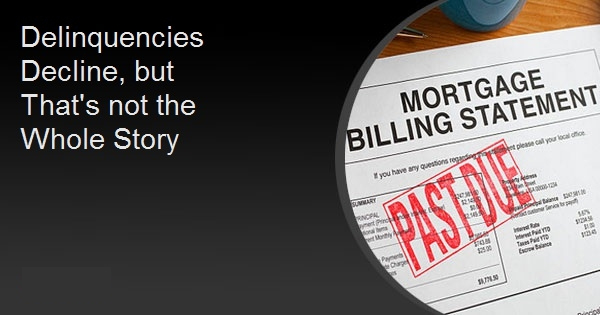 Delinquencies Decline, but That's not the Whole Story

While overall mortgage delinquencies declined by 0.03 percent from July to August, Black Knight's newest Mortgage Monitor reveals some disquieting information about mortgage delinquencies emerging out of the pandemic's financial upheaval. The company, however, says there are also potentially mediating factors.

The overall delinquency rate in August was 6.88 percent 3.6 percent above the pre-pandemic level, but down 0.03 percent month-over-month. The July to August change was considerably smaller than the 0.85 aggregate change in June and July, indicating the rate of improvement may be slowing. This does not, however, mean that more borrowers falling into financial difficulty, but rather that the problem is becoming persistent.

The share of borrowers with only one missed payment was already below pre-pandemic levels in July and in August that number fell again. The number of loans in the 30- to 60-days past due bucket dropped by other 9.0 percent. At the same time, serious delinquencies, loans 90 or more days past due, increased by 5 percent and have risen in each of the past five months. Black Knight said the volume of new delinquencies, loans transitioning from current to 30-days past due, rose from 419,000 in July to 445,000 in August, and the number of loans rolling from 30 to 60 and 60 to 90 days declined. But fewer mortgages were cured. The number of homeowners who brought their mortgages current during the month decreased from 710,000 in July to 421,000 in August, a -40 percent change. This decline was apparent in both early stage and serious delinquencies although the company says this may be partially due to a smaller number of forbearance expirations during the month. Black Knight Data & Analytics President Ben Graboske said, "When COVID-19 first began to impact the mortgage and housing markets, there was no easy historical precedent by which to gauge the fallout, so we looked to mortgage performance in the wake of recent recessions and natural disasters for clues. And for the first several months of the pandemic, the performance impact of COVID tracked relatively closely to that of major hurricanes."

That, however, has changed and the trend lines are diverging. Looking now at data recording the current three-month rate of improvement since the peak in May, there is a difference from that seen in the natural disaster trendlines. Carrying that three-month rate forward shows that delinquencies may not return to pre-pandemic levels for 19 months, until March 2022. When the first wave of COVID-19-related forbearance plans reach the 12-month expiration period, the longest allowed by the CARES Act, in March 2021, the current pattern suggests there would still be a million excess delinquencies. Given that early-stage delinquencies have already fallen below pre-pandemic levels, the bulk of those delinquencies will be seriously so. While serious delinquencies tend to peak 3-4 months after a natural disaster event, there has been no such peak as yet, instead there have been five months of increases. The company says there is one bright spot: "August's increase in serious delinquencies was the mildest of any of those five months, which - combined with the shrinking inflow of new delinquencies - suggests we could be nearing the peak. But as with so much these days - it still remains to be seen."

Graboske says, "While this may seem to paint a bleak picture for the future, multiple mitigating factors could help to reduce any resulting foreclosure wave. First and foremost, while recovery has been slow and incremental, the bulk of homeowners who have come out of forbearance are currently performing on their mortgages."

Indeed. Of the 6.1 million homeowners who have been in forbearance at one point or another since the onset of the pandemic, 2.4 million  or 41 percent have exited, and of those, 1.8 million are currently back to making their mortgage payments. Another 363K have paid off their mortgages in full, either through refinancing or the sale of their home. At present, 267,000 (4 percent) are still past due but are in an active loss mitigation working with their servicers to get back to current status. That leaves 54,000 of formerly forborne homeowners who are past due and not in active loss mitigation. Seventy 70 percent of these were already delinquent in February before the pandemic began. Despite the pandemic, most homeowners continue to pay their mortgages. Through September 22, 88.9 percent of all first mortgage holders had made their payment which suggests that the national delinquency rate might fall again in September if the increased payment activity continues through the end of the month. Another mitigating factor in the delinquency situation is the amount of equity that exists, $6.6 trillion, the most in history. Among borrowers in forbearance, just 9 percent have less than 10 percent equity in their homes, which offers both borrowers and lenders multiple options in lieu of foreclosure. Fewer than 1 million homeowners are currently underwater in their mortgages.

Even when applying distressed valuations to the more than 2.5 million homes either 90 or more days past due or in active foreclosure, Graboske says tappable equity hit another record high in Q2 2020 as home prices continued to rise across much of the country. "In total, nearly 45 million homeowners have tappable equity in their homes, the largest volume ever. The average homeowner now has nearly $125,000 in tappable equity; an increase of more than $3200 from last year - also a record. These strong equity positions help to provide a backstop to elevated delinquency levels and slow recovery from COVID-19-related impacts."

These equity positions are unlikely to erode in the short term. As of the end of July, there were 1.5 million existing homes for sale, down more than 20 percent from the year prior and the lowest July month-end number since the housing recovery began in 2012. While home prices stagnated in May and June, price growth has since recovered in a big way, with August's annual home price growth rate at 11.5 percent, the highest since mid-2013. Early numbers from September suggest record highs could be seen in coming months.

And, speaking of rising home prices, Black Knight says low interest rates continue to provide a counterweight to those numbers. As of September, it took 19.4 percent of the median household income to make a monthly mortgage payment on the average priced home. This assumes a 20 percent downpayment on a mortgage at the prevailing interest rate. This is 0.4 percent less than the percentage required in August and means homeownership is the most affordable since October 2016.