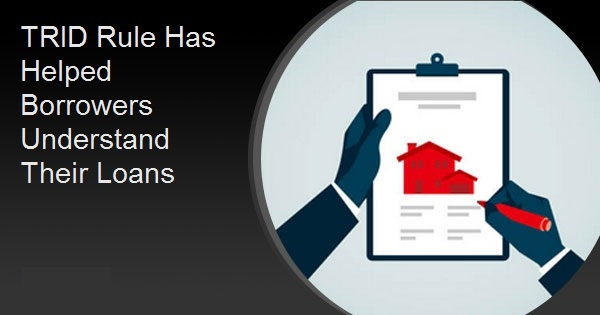 The TRID Rule has been in effect for exactly 5 years (October 3, 2015) and the Consumer Financial Protection Bureau (CFPB) has published an assessment of its effects and effectiveness. The TRID Rule and its associated disclosures and forms was part of a mandate to CFPB included in the Dodd-Frank Wall Street Reform and Consumer Protection Act to combine previously separate mortgage disclosures given to consumers under the Truth in Lending Act (TILA) and the 1974 Real Estate Settlement Procedures Act (RESPA). Dodd-Frank also mandates an assessment of the rule within five years of the effective date.

The goals of the rule include:

It was also hoped that the rule would enable consumers to pick the best loans for them, know whether they actually get the price and terms they expected, allow time for questions and negotiation between application and settlement, promote more efficient closings, and lower paperwork burdens.

§  TRID disclosure forms improved prospective borrowers' abilities to locate key mortgage information and improved their abilities to both compare the features and costs of different mortgage offers and to compare estimated and actual loan terms and costs.

§  Evidence was mixed regarding whether the Rule increased consumer shopping for mortgages.

CFPB Director Kathleen L. Kraninger said that the Dodd-Frank Act does not requirement assessments to include a cost-benefit analysis, but she has made it a priority to include them. However, despite the Bureau's best efforts it was not possible to obtain the data necessary to do such an analysis of the TRID Rule. It does, however, appear to have created sizeable implementation costs for lenders and closing companies.

The effects on ongoing costs is less clear.  Industry data indicate that mortgage lending costs have steadily increased over the past decade, but there is no data that demonstrates how much, if any, of these increased costs are attributable to the TRID Rule. This is compounded by the fact the Bureau implemented other mortgage rules at roughly the same time that also may have affected costs.  Lenders indicated their largest implementation costs to be new information technology systems, policies, and training while closing companies said their costs largely stemmed from efforts to understand the requirements of the Rule and from new information technology systems, policies, and training.

The TRID Rule appears to have decreased mortgage originations and increased closing times and the time it was implemented, butt these measures returned to pre-TRID Rule levels in a relatively short period of time. Originations of home purchase mortgages and refinance mortgages dropped notably in the first two months after the Rule's effective date (roughly 14 percent and eight percent, respectively) but recovered quickly.  This pattern may be explained by the increase in typical closing times, which would have pushed back the origination dates for some mortgages.

A mortgage quality control software provider reports the share of mortgages with at least one critical defect, one that would result in the mortgage being uninsurable as part of a security or ineligible for sale to its intended recipient on the secondary market, did increase to 1.8 percent during the quarter the rule was implemented (Q4 2015) from 1.2 percent the prior quarter. However, 1.8 percent was also the approximate defect rate in Q2 of that year.