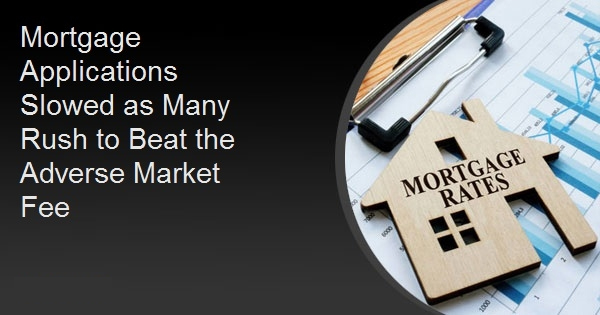 Mortgage application volume has fallen into an up and down pattern over the last few weeks and last week went to the negative side. The Mortgage Bankers Association said its Market Composite Index decreased 4.8 percent on a seasonally adjusted basis during the week ended September 25 and lost 5 percent on an unadjusted basis.

The Refinance Index fell by 7 percent but was 52 percent higher than the same week in 2019. Refinancing continues to dominate the action, although its share of total applications was down from 64.3 percent during the week ended September 18 to 63.3 percent.

The Purchase Index decreased 2 percent on both an adjusted and unadjusted basis from the previous week but was 22 percent higher than the same week one year ago. An unbroken string of annual increases now dates back to the week ended May 22.

"First off, we're not really seeing a big enough drop in either side of the application numbers to label it as anything other than normal volatility in the bigger picture," according to MBS Live CEO Matt Graham.  "But if there is a cause and effect relationship here, it's that refinance activity is being pulled forward aspeople have rushed to get applications and locks in before getting hit with the new adverse market fee.  This primarily took place on the week of 9/14 through 9/18 as that's when a majority of lenders began to re-implement the adverse market fee.  A bit of a drop off in the following week (i.e. last week) is a logical consequence.  Incidentally, it also helps explain the relative surge in applications reported last week."

"Mortgage rates decreased last week, with the 30-year fixed rate mortgage declining 5 basis points to 3.05 percent - the lowest in MBA's survey. Despite the decline in rates, refinances fell over 6 percent, driven by a 9 percent drop in conventional refinance applications," said Joel Kan, MBA's Associate Vice President of Economic and Industry Forecasting. "There are indications that refinance rates are not decreasing to the same extent as rates for home purchase loans, and that could explain last week's decline in refinances. Many lenders are still operating at full capacity and working through operational challenges, ultimately limiting the number of applications they are able to accept."

Added Kan, "Purchase applications also decreased last week, but activity was still at a strong year-over -year growth rate of 22 percent. Even as pent-up demand from earlier in the year wanes, there continues to be action in the higher price tiers, with the average loan balance remaining close to an all-time survey high."

Except for 15-year fixed-rate mortgages (FRM) both contract and effective rates moved lower. The average contract interest rate for 30-year FRM with balances at or below the conforming limit of $510,400 decreased to 3.05 percent from 3.10 percent, with points increasing to 0.52 from  0.46.

Jumbo 30-year FRM, loans with origination balances above the conforming limit, had an average rate of 3.33 percent, down from 3.35 percent the prior week. Points declined to 0.39 from 0.42.

Fifteen-year FRM rates increased an average of 1 basis point to 2.65 percent. Points grew to 0.49 from 0.47 and the effective rate increased.

The average contract interest rate for 5/1 adjustable rate mortgages (ARMs) decreased to 2.95 percent from 3.19 percent, with points decreasing to 0.55 from 0.64. The ARM share of activity remained unchanged at 2.2 percent of total applications.

MBA says a further decline in loans serviced for the GSEs, took the total number of mortgage loans in active forbearance plans down to 3.4 million last week. The percentage of all loans in plans dropped 6 basis points to 6.93 percent. By stage, 30.26 percent of total loans in forbearance are in their initial forbearance plan while 68.37 percent are in a forbearance extension. The remaining 1.37 percent have reentered their plans.

"The share of loans in forbearance continues to decline and is now at a level not seen since mid-April. Many homeowners with GSE loans are exiting forbearance into a deferral plan and resuming their original mortgage payment but waiting to pay the forborne amount until the end of the loan," said Mike Fratantoni, MBA's Senior Vice President and Chief Economist. "However, the overall picture is still somewhat of a mixed bag. The recent uptick in forbearance requests, particularly for those with FHA or VA loans, is leaving the Ginnie Mae share elevated, as the pace of new requests meets or exceeds the pace of exits."

Added Fratantoni, "The continued churn in the job market is likely keeping many homeowners who have been in forbearance reluctant to exit, given the level of economic uncertainty."