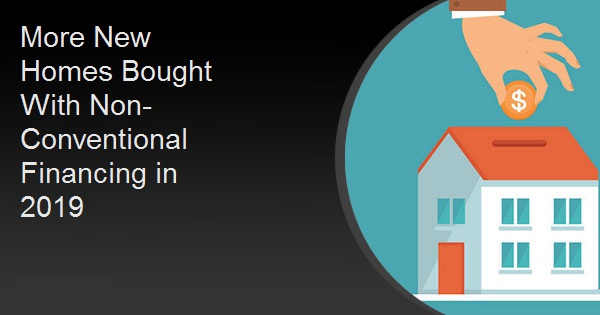 A conventional mortgage is a home loan that isn't backed by a government agency. Non-conventional forms of financing include loans insured by the Federal Housing Administration (FHA), VA-backed loans, cash purchases and other types of financing such as the Rural Housing Service, Habitat for Humanity, loans from individuals, state or local government mortgage-backed bonds.

NerdWallet says conventional mortgages often meet the down payment and income requirements set by the GSEs Fannie Mae and Freddie Mac, and they often conform to the loan limits set by the Federal Housing Finance Administration (FHFA), the GSE regulator. Conventional loan borrowers who put at least 20 percent down don't have to private mortgage insurance which is typically required with lower down payments or government-backed loans. Danushka Nanayakkara-Skillington, writing in NAHB's Eye on Housing blog says the Census Bureau's Survey of Construction (SOC) data indicates that FHA financing was the most common form of non-conventional loans. Its share of new home purchases increased 4 percentage points from the prior year to 15 percent.  The share of cash purchases, the second most prevalent form of non-conventional financing, was at 11.0 percent nationwide in 2019. VA-backed loans accounted for 6.0 percent and other financing has a 3.0 percent market share.

The reliance on non-conventional forms of financing varied across the United States. The high was in the West South Central census division (Texas, Oklahoma, Louisiana, Arkansas) at 48.5 percent and lowest in the Middle Atlantic division (New York, New Jersey, Pennsylvania) at 15.8 percent.