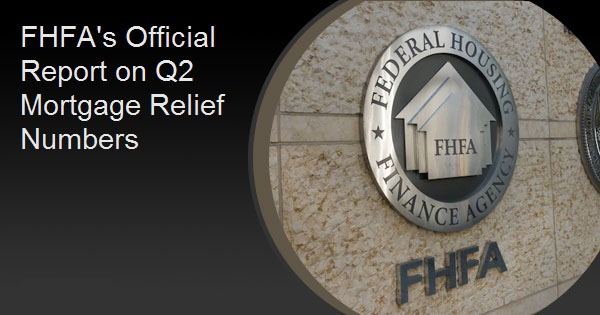 In its 2nd quarter Foreclosure Prevention and Refinance Report the Federal Housing Finance Agency (FHFA) says it has helped almost 4.7 million distressed homeowners since it became conservator of the GSEs Fannie Mae and Freddie Mac in August 2008. Over 250,000 of them took place in the second quarter of this year as the pandemic caused millions of job layoffs.

The 12-year record of homeowner assistance includes helping 3.99 million homeowners stay in their homes and completion of 2.42 million loan modifications. For 2020 through the end of the second quarter the GSEs completed 30,764 loan modifications, 38 percent of which were on loans originated prior to 2009.  Sixty-five percent of this year's mods were extend-term only.

FHFA said increases in home prices over the last few years have increased home equity even for delinquent borrowers, influencing the modification type. Interest rate reductions are generally offered to borrowers with little or no equity. This has contributed to lower concessions as reflected in the size of payment change. More than half (57 percent) of loans modified in the fourth quarter of 2019 were current and performing six months later. Forbearance plans have been utilized especially heavily since the beginning of March. The number of homeowners in these plans jumped from 170,533 in the first quarter of the year to 1.512 million in the second. There were also 922 short sales and deeds-in-lieu, bringing the 12-year total to just under 700,000. California has the highest number of seriously delinquent loans, followed by Florida and New York. Approximately 35 percent of GSE delinquent loans had missed three or more payments by the end of the quarter. There are still a few judicial review states with extremely aged delinquencies of at least a year. In New York 1,910 of the state's 7,600 aged loans are more than 72 months past due. In Florida it is 777 of a 5,832 total. Of all the GSEs deeply delinquent loans 41 percent are in those two states plus Illinois, New Jersey, and Pennsylvania, all of which use judicial review. Twenty-five percent of those have been delinquent for six years or more.

Foreclosure starts for GSE loans were down 74 percent during the quarter to 7,551 and third-party and foreclosure sales fell 87 percent to 1,028. Both declines were due the foreclosure moratorium.

The REO inventories of the GSEs dropped 24 percent to 15,487 quarter-over-quarter. The total number of property acquisitions declined 87 percent to 660 as foreclosures were suspended. Dispositions were down 21 percent, but the GSEs still disposed of 5,464 properties during the second quarter.

Refinancing activity for the GSEs was the highest since 2013 as interest rates dropped. There were 1.522 million loans refinanced in the second quarter, more than double the number (747,463) in Q1. Twenty-seven percent of refinances were cash-out, down 1 percentage point from the previous quarter.

The percentage of refinances into 15-year term mortgages increased to 25 percent in May, more than in other recent months, but below the levels when the difference in 15- and 30-year rates was more pronounced.