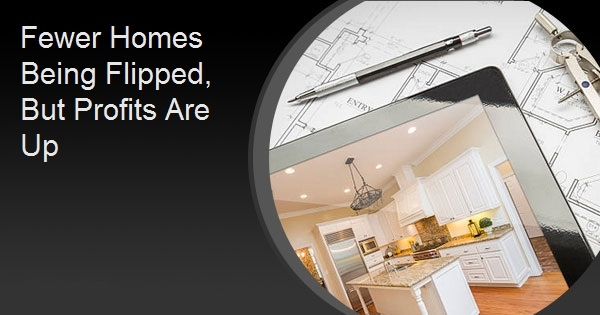 Fewer Homes Being Flipped, But Profits Are Up

While flipping declined slightly last quarter, both profits and profit margins were up. The median sales price of second quarter flips was $232,402 and the median paid by the investor was $164,500. This resulted in a gross profit on the typical home flip nationwide of $67,902. This 41.3 percent return on investment (ROI) was the highest since a 43.4 percent return in the fourth quarter of 2018. Both the gross profit and in ROI in the quarter were higher than the prior quarter's $63,000 profit and 38.9 percent ROI and the $61,900 and 40.4 percent netted a year earlier. The second quarter ROI marked the first quarterly increase since the third quarter of 2018 and the first year-over-year gain since the fourth quarter of 2017. The opposing trends - the flipping rate down but profits up, reflect the situation nationwide as the coronavirus depressed home sales but not prices. As sales fell, those home seekers who were able and willing to take advantage of historically low mortgage rates ventured into the market and competed for a reduced supply of homes for sale.

"Home flipping was a study in contrasts in the second quarter of 2020, as the flipping rate went one way and profits went the other," said Todd Teta, chief product officer at ATTOM Data Solutions. "Far fewer house hunters were out in the market looking for homes, which probably cut into the pool of potential buyers that investors could tap. But at the same time, home flippers who were able to close deals did better than they had done in a year and a half. That likely flowed in large part from extremely low interest rates that enticed buyers who remained employed and were willing to house-hunt within social distancing requirements."

The decline in flipping from the first to second quarter was broad based, occurring in 114 of the 151 metropolitan statistical areas analyzed in the report (75.5 percent). (Metro areas were included if they had at a population of 200,000 or more and at least 50 home flips in the second quarter of 2020.) The largest decreases were in Durham, North Carolina at 40.7 percent, Provo Utah, and Boston with declines of 36.6 percent and 35.1 percent, respectively.

There were also areas where flipping increased. The top three in that category were Salisbury, Maryland where the rate was up 45.8 percent, and two Florida metros, Fort Myers (up 20.2 percent) and Tallahassee, (16.8 percent.)