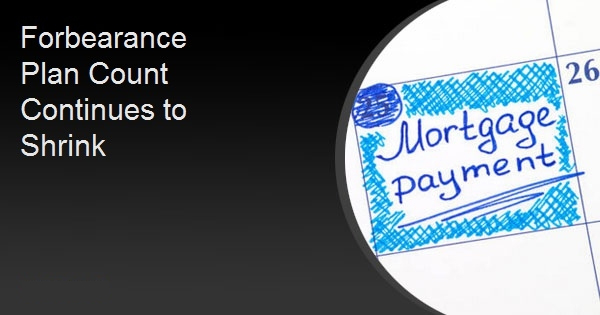 There was a fourth straight decline in the number of mortgage loans in forbearance during the week ended September 15. Black Knight says the total dropped by 26,000 or 0.7 percent to an estimated 3.7 million loans. That is down 22 percent from the peak of over 4.7 million in late May. Volumes have declined in 10 of the last 12 weeks. The remaining forborne loans represent 7 percent of all active mortgages and $781 billion in unpaid principal.

Black Knight says there are 1.7 million plans set to expire in September so there could be significant numbers of plan extensions as well as plans ending over the next few weeks.

The week's decline was primarily driven by GSE loans, with active forbearance plans dropping by 28,000 (-2 percent). There are now 1.361 million Fannie Mae and Freddie Mac loans in plans, 4.9 percent of those portfolios.

FHA/VA loans had a 3,000 decline during the week and active forbearances among loans held in private label securities (PLS) or banks' portfolios rose by 5,000. There are now 1.365 million FHA/VA loans in forbearance, 11.3 percent of the total and 966,000 portfolio/PLS loans, 7.4 percent.

Black Knight estimates that, even with these declines, principal and interest (P&I) advances on GSE loans still total $1.5 billion monthly with another  $600,000 due for taxes and insurance (T&I) payments. FHA/VA advances total $1.2 billion for P&I and $500,000 for T&I and loans serviced for others have potential obligations of $1.7 billion and $500,000, respectively.