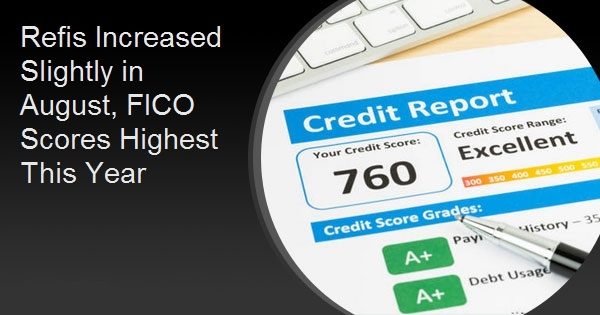 As a result of these rates, the refinance share grew to 56 percent of all loans, up from 54 percent in July. The purchase mortgages share dipped to 44 percent from 46 percent.

"Interest rates are at historic lows, driving volume across both purchases and refinances. In August of 2019 we saw 30-year rates just over four percent across all loans, while this month we're seeing average rates almost one percentage point lower. Not only does this enable homebuyers to get more home for their dollar, it allows new homebuyers who might be waiting for a good deal to enter the market," said Joe Tyrrell, chief operating officer, Ellie Mae. "As lenders continue to manage high volumes, technology is bridging the gap to add efficiency to manual workflows behind the scenes while freeing up workforces to provide the human interaction that homebuyers demand."

The distribution of loans across products was unchanged from the previous month. Eleven percent of originations were FHA loans, VA loans accounted for 6 percent, and 79 percent were conventional loans.

FICO scores continued to increase to 2020 highs, rising to 752 for all loans from 750 the month prior.

The Origination Insight Report mines data from a large sample of approximately 80 percent of all mortgage applications that were initiated on its mortgage management system. The company says its report is a strong proxy of the underwriting standards employed by lenders across the country.