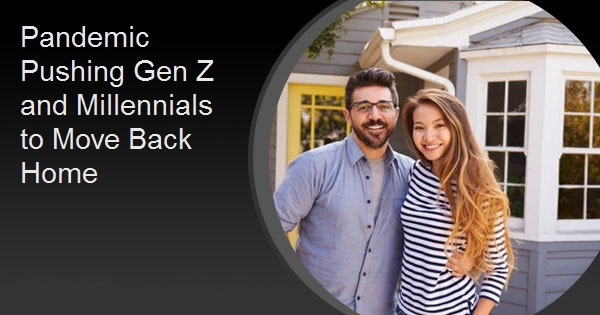 Pandemic Pushing Gen Z and Millennials to Move Back Home

It was a phenomenon 12 years ago that ended with a huge decline in homeownership among Millennials, and now it is happening, for the same reason to Gen Zas a huge surge in unemployment sends young adults home to live with their parents. The root cause this time, of course, is vastly different; a deadly virus rather than a general slowdown in the economy coupled with mortgage defaults and delinquency.

The Pew Research Center has found that the share of 18- to 29-year-olds living with their parents now constitutes a majority of that age group, surpassing the share in the Great Recession and even topping the previous peak during the Great Depression.

Three Pew Center analysts, Richard Fry, Jeffrey S. Passel, and D'Vera Cohn found, using Census Bureau data, that in July 26.6 million  or 52 percent of young adults  resided with one or both of their parents, up from 24 million or 47 percent in February. The increase was evident for all major racial and ethnic groups, men and women, and metropolitan and rural residents, as well as in all four main census regions. Growth was sharpest among the youngest age group, ages 18 to 24, and White young adults. Prior to the coronavirus outbreak the highest documented number of parent-housed young adults was in the 1940 census at 48 percent. The peak may have been higher during the worst of the Great Depression in the 1930s, but there is no reliable data. The share declined in both the 1950 and 1960 Census before rising again. The monthly share has been about 50 percent since April, maintaining that high a level for the first time since data from the Current Population Survey (CPS) became available in 1976. The authors say that young adults have been particularly hard hit by the pandemic and subsequent economic downturn and are more likely to move than other age groups. About one-in-ten young adults (9 percent) told a Pew Center survey that they relocated temporarily or permanently due to COVID-19 and about the same share had someone move into their household. Among all adults who moved due to the pandemic, 23 percent said this was primarily because their college campus had closed, and 18 percent said it was due to job loss or other financial reasons.

The youngest adults (ages 18 to 24) accounted for most of the growth in the number of 18- to 29-year-olds living with their parents from February to July; 2.1 million of the 2.6 million increase was attributable to them. Sixty-three percent of this age group already lived with their parents before the pandemic, but the share grew to 71 percent in July.

The pattern is consistent with employment losses since February. The youngest adults have been more likely than other age groups to lose their jobs or have their pay cut. The share of 16- to 24-year-olds who are neither in school nor employed more than doubled from February (11 percent) to June (28 percent) due to the pandemic and consequent economic downturn.

The Northeast remained the region with the largest share of young adults living at home (57 percent), but growth was sharpest in the South, where the total rose by more than a million and the share increased from 46 percent to 52 percent.

It is worth noting that the CPS numbers count unmarried students living in college dorms as living in their family home. Thus, the increase those living with parents this year are not due to closure of those dorms last spring.

There is, however, a seasonal pattern. The share of young adults living with their parents tends to rise slightly in the summer. In 2019, for example, that share rose by less than 2 percentage points in July compared with February. But this year, the increase was more than 5 points.

The authors stress that these new living arrangements don't just affect young adults and their families, but the entire economy given the importance of the housing market to overall economic growth. Even before the outbreak, the household growth trailed population growth, in part because people were moving in with others. Slower household growth could mean less demand for housing and household goods. There also may be a decline in the number of renters and homeowners, and in overall housing activity. Between February and July 2020, the number of households headed by an 18- to 29-year-old declined by 1.9 million, or 12 percent to 13.9 million.