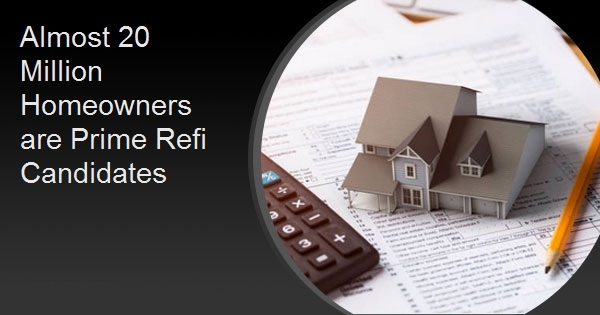 Freddie Mac's Mortgage Market Survey published yesterday reported a 7-basis point decline in the 30-year mortgage rate over the previous week and reported that the resulting rate, 2.86 percent, was a new record low. Black Knight reports that this new rate has had a big impact on the pool of refinance candidates.

The company says there are now 19.3 million "high quality" refinance candidates, the largest number ever. This is 43 percent of all active 30-year mortgages. Black Knight defines a refinanceable loan as one where the homeowner has a credit score of at least 720, at least 20 percent equity in the home, and the potential for a 75-basis point reduction in their mortgage interest rate. These homeowners have potential savings averaging $299 per month, a national aggregate of $5.8 billion per month if all homeowners took advantage of the opportunity. That is the largest aggregate ever available through refinancing.

Further, if the eligibility criteria are removed, that number of potential refinances increases to 32.4 million or three out of every four active mortgages.