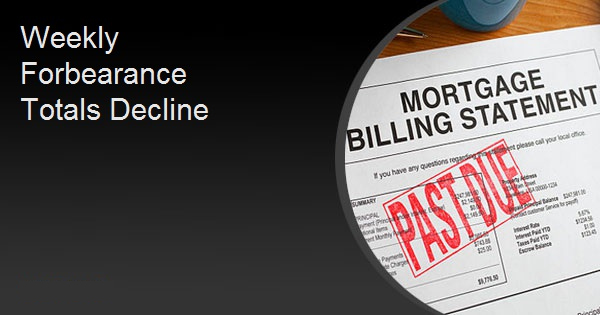 The number of loans in forbearance continued to dwindle over the last week, with almost 66,000 fewer homeowners in plans. Over the last 30 days the decline has totaled 238,000 or 6.0 percent.

Black Knight says that, as of September 8, about 3.7 million plans are still active, 7 percent of the mortgages in servicer portfolios. This is a 22 percent decline from the peak of 4.7 million in late May. The remaining plans represent $789 billion in unpaid principal.

At the beginning of September there were 2 million plans that were set to expire during the month and servicers have already reduced that number to 1.7 million as they assess loans for extending or terminating their plans.

The week's decline was primarily driven by GSE loans, which fell by 36,000 loans to 1.39 million or 5.0 percent of their portfolios. FHA/VA loans saw a more modest weekly decline of 18,000 bringing that total to 1.37 million or 11.3 percent.  Active forbearances among loans held in private label securities (PLS) or banks' portfolios total 961,000 or 7.4 percent, down 12,000 loans week-over-week.

While 75 percent of borrowers in forbearance have had their plans extended, new entries into plans hit their lowest level in more than 5 months. An estimated 48,000 plans were initiated in the first week of September, down 16 percent from the previous week and 22 percent during the first week of August.

Black Knight's most recent Mortgage Monitor took an in-depth look at forbearances as of the end of August. They noted that the previous 30 days had seen a decline of 171,000 plans or 4 percent of the total. GSE loans have led the decrease through most of the forbearance program and accounted for 128,000 of the 30-day total of departures with more modest reductions in FHA/VA loans and bank/PLS portfolios of 23,000 and 20,000, respectively.

The company says it has seen little impact, so far, from the reduction in expanded unemployment benefits which hit at the end of July. During the first four weeks of August, new plans were down by 13 percent from the comparable period in July. As noted above, more than 2 million plans were set to expire at the end of the month although servicers have whittled down that number. There will, however, still be a significant volume of extension/removal activity in late September and early October. In August about a half-million homeowners exited forbearance and about the same amount had their plans extended. This was a 60 percent decline from extensions during the prior four weeks but only a 40 percent drop in removals. Black Knight's Mortgage Monitor partially answer the biggest question we have had about forbearance. Does it help?

Not all past due mortgages are in plans nor are all forbearance plans directly related to the pandemic's impact. Forty-five percent of the 1.2 million loans that were non-current prior to the crisis are in a plan along with 85 percent of those loans that have become past due over the last five months. There are 1 million delinquent mortgages that are not currently in forbearance, 62 percent of which are federally backed (680,000). Some 405,000 are FHA/VA loans. Forbearance plans cover 13.2 percent of PLS loans, but only 36 percent of delinquent loans and 25 percent of those delinquent pre-COVID. At the same time 71 percent of past due bank portfolio mortgages are in plans, suggesting those mortgage owners see the value in forbearance even with a mandate from the CARES Act to provide it.