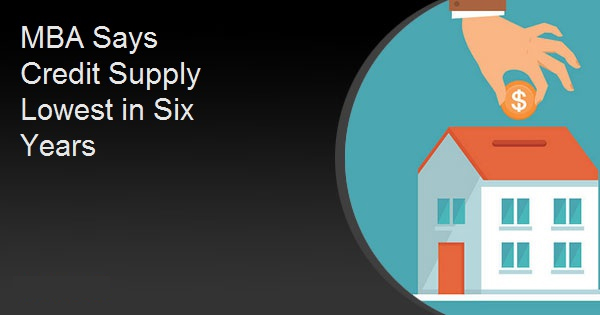 The Mortgage Bankers Association's (MBA's) Mortgage Credit Availability Index (MCAI) continued to drop in August, an indication that lending standards are tightening. The index fell by 4.7 percent to 120.9 in August. In January, before interest rates started an unprecedented decline and servicers were instructed to grant forbearances to existing borrowers, the MCAI was at 181.9. It was benchmarked to 100 in March 2012. "Mortgage credit supply fell to its lowest level since March 2014, driven by a reduction in supply from both conventional and government segments of the market," said Joel Kan, MBA's Associate Vice President of Economic and Industry Forecasting. "Additionally, both conforming and jumbo sub-indexes fell by almost 9 percent each, with the conforming index declining to the lowest reading since MBA's series began in 2011. Credit continues to tighten because of uncertainty still looming around the health of the job market, even as other data on loan applications and home sales show a sharp rebound. A further reduction in loan programs with low credit scores, high LTVs, and reduced documentation requirements also continued to drive the overall decline in credit availability."

Added Kan, "Jumbo credit availability has fallen around 59 percent since the pre-pandemic months, and data from MBA's Weekly Applications Survey showed that jumbo mortgage rates stayed over 30 basis points higher than conforming rates in August, which is another indication of the reduced investor appetite for those loans."

The MCAI and each of its components are calculated using several factors related to borrower eligibility (credit score, loan type, loan-to-value ratio, etc.). These metrics and underwriting criteria for over 95 lenders/investors are combined by MBA using data made available via a proprietary product from Ellie Mae. The resulting calculations are summary measures which indicate the availability of mortgage credit at a point in time. Base period and values for total index is March 31, 2012=100; Conventional March 31, 2012=73.5; Government March 31, 2012=183.5.