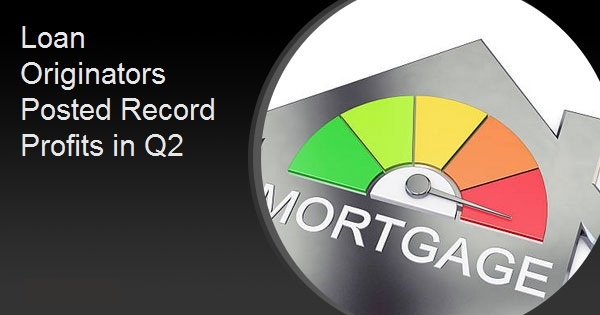 While servicing income was down, independent mortgage banks (IMBs) and mortgage subsidiaries of chartered banks had a very profitable second quarter. They reported an average net gain of $4,548 on each loan they originated, up from a reported gain of $1,600 per loan in the first quarter of 2020, according to the Mortgage Bankers Association's (MBA) newly released Quarterly Mortgage Bankers Performance Report.

"Fueled by a surge in borrower demand and record-low mortgage rates, mortgage production profits in the second quarter reached the highest level since the inception of MBA's report in 2008," said Marina Walsh, MBA's Vice President of Industry Analysis. "Production volume averaged over $1 billion per company, and there was an ideal combination of higher revenues and lower costs. Revenues climbed by 57 basis points (bps) from the first quarter, while expenses improved by $844 per loan. Productivity also increased, reaching levels not seen since 2012."

Added Walsh, "Servicing profitability did take a hit last quarter. Mortgage servicing right (MSR) markdowns and amortization continued, and there was a loss of servicing income from elevated default activity. Despite these servicing losses, 96 percent of firms in the report posted overall profitability for the second quarter."

Including all business lines (both production and servicing), 96 percent of the firms in the study posted pre-tax net financial profits in the second quarter, up from 78 percent in the first quarter.

Purchase mortgages had a 39 percent share of total originations by dollar volume, down from 52 percent in the first quarter. For the mortgage industry as a whole, MBA estimates the purchase share was at 37 percent during the second quarter. The average pull-through rate (loan closings to applications) was 71 percent, an increase of 4 percentage points quarter-over-quarter.

The average loan balance for first mortgages increased to a new study high of $282,309. The balance averaged $276,291 in the first quarter.

MBA's Mortgage Bankers Performance Report is derived from a survey covering 348 mortgage originating companies. Eighty-two percent of the respondents were independent mortgage companies, and the remaining 19 percent were subsidiaries and other non-depository institutions.