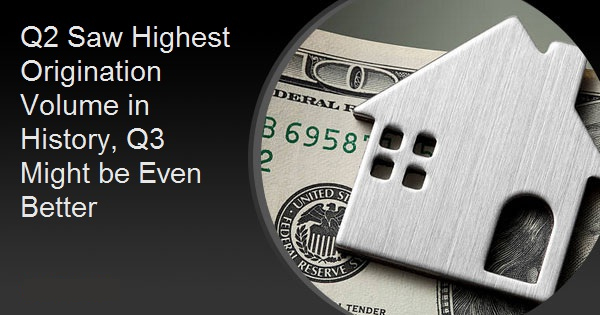 Q2 Saw Highest Origination Volume in History, Q3 Might be Even Better

The second quarter of this year was a miserable on many levels, but mortgage origination volume was not one of them. Black Knight's current Mortgage Monitor reports that the second quarter saw the largest quarterly origination volume since the company began tracking it at the beginning of 2000. Low interest rates drove refinancing up by more than 60 percent compared to the previous quarter and 200 percent higher than in the second quarter of 2019. There were $1.1 trillion in first lien mortgages originated during the period, 70 percent of it through refinancing.

The 2.3 million refis in the second quarter were dominated by rate/term refinances which saw a four-fold increase from a year earlier Cash-out refinances increased as well, up by 66 percent, but had only a 30 percent share of refinance originations, the lowest in more than six years. Borrowers who opted for cash-out refinancing did so in a relatively modest way, withdrawing an average of $62,000 in equity, the lowest since late 2016. Still, the sheer volume drove the aggregate equity tapped to $44.6 million, more than a 10-year high.

Despite wide-spread business closings and shelter at home orders, purchase lending also did remarkably well. Originations were down 8.0 percent, but there was still about $351 billion in volume.  After an understandable sharp downturn in closings in May purchase demand returned more quickly than many expected. The company says, with interest rates remaining below 3.0 percent for much of the third quarter to date, it expects origination volumes to climb even higher. Rate lock data supports that theory. It indicates that purchase originations will reflect a delay in the homebuying season from the second until the third quarter this year and provides some clarity of the impact the COVID-19 pandemic has had on purchase lending.

In the second quarter purchase locks scheduled to close in the second quarter fell 10 percent below expectations as the pandemic took hold. So far in the third quarter (which ends on September 30) those locks have rebounded by 37 percent. This bucks the historic trend in which purchase lending peaks in Q2. Thus, rate locks scheduled to close this quarter are 23 percent higher than seasonal expectations, and, combined with Q2, are 6 percent higher than the expected volume during those six months based on January's pre-pandemic baseline.

Refinance rate locks are also promising. Assuming a 45-day lock-to-close timeline, closings could be up 20 percent in the third quarter compared to Q2.

Black Knight Data & Analytics President Ben Graboske said, "Purchase locks in Q3 2020 have already made up for the losses of a COVID-impacted Q2 - and then some - based upon normal seasonal expectations. In fact, rate locks are suggesting that we could see Q3 purchase lending break typical seasonal trends and rise by 30-40 percent, which would push us to a new record high. Likewise, while Q2 refinance activity was record-breaking, refi lock data suggests Q3 refinance volumes could climb even higher.

"With market conditions as they are and given the recent delay of the 50-basis points fee on GSE refinances until December, we would expect near-record low interest rates to continue to buoy the market. After all, there are still nearly 18 million homeowners with good credit and at least 20 percent equity who stand to cut at least 0.75 percent off their current first lien rate by refinancing."

But, while refinancing is booming, servicers continue to face retention problems. Black Knight says they hung on to only 18 percent of borrowers who refinanced during the second quarter. Fifty percent of mortgage prepays are coming from mortgages originated win the last three years.  The 2018 vintage has the highest prepayment speeds of any vintage in more than a decade, but borrowers refinancing out of loans originated in 2019 make up the largest share of refinances, 20 percent of the total. This means that vintage should be one focus of retention efforts.

The data further shows that, though rate/term refinance borrowers are indeed price-sensitive, high-credit borrowers refinancing into GSE mortgages in Q2 received an interest rate only 7 basis points lower on average than borrowers who were retained. Black Knight says that, while pricing is certainly important, the marginal rate differences between retained and lost borrowers suggest that proactively identifying and marketing to high-risk prepay cohorts may likely be key to raising retention rates. The company concludes that, with interest rates so low, the stakes become even higher. A 5-point gain in retention rates could mean the holding on to 100,000 additional borrowers across the market in a single quarter.

The Mortgage Monitor also looked at delinquencies and forbearances amid the pandemic. The information is much more detained than in Black Knight's weekly forbearance report and deserves more attention; it will be covered separately.