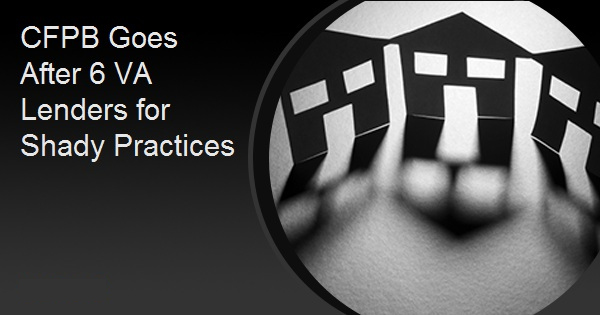 The Consumer Financial Protection Bureau (CFPB) has been on a two-month enforcement tear aimed at mortgage lenders employing deceptive practices in the VA mortgage lending area. The Bureau has issued consent orders against six companies since late July in what it terms a "sweep" in response to concerns about potentially unlawful advertising in the market that the VA identified.

The companies are variously accused of using advertisements that misrepresented advertised loans by stating credit terms that the company was not actually prepared to offer to the consumer such as describing an introductory interest rate as fixed when it was instead adjustable. Advertisements also created the false impression that the companies were affiliated with the government by using words, phrases, images, or designs that are associated with the VA or the Internal Revenue Service. Some advertisements also conveyed the false impression that the company was affiliated with the borrowers existing lender or made false claims about those existing loans while claiming the loans they offered would cure the deficiencies.

In addition to various civil penalties, the consent orders also impose injunctive relief to prevent future violations, including requiring the companies to designate an advertising compliance official to review their advertisements for compliance with mortgage advertising laws prior to their use; prohibiting misrepresentations similar to those identified by the Bureau; and requiring the companies to comply with certain enhanced disclosure requirements to prevent them from making future misrepresentations.

Here is a summary of the companies affected, their alleged violations, and penalties assessed.

The first orders were issued on July 24 against two California Corporations, Sovereign Lending Group and Prime Choice Funding. Prime Choice is licensed as a broker or lender in 35 states and Sovereign in 44 states. Both are also licensed in Washington DC. The consent order against Sovereign requires it to pay a civil penalty of $460,000. The Prime Choice penalty is $645,000.

The third consent order was issued on August 21 against Go Direct Lenders, Inc. a California corporation that is licensed as a mortgage broker or lender in about 11 states.  Go Direct will be required to pay a civil penalty of $150,000.

Number four, on August 26 was PHLoans.com, Inc., formerly known as Pacific Home Loans. This is another California-based lender, licensed in 11 states. The civil penalty assessed is $260,000.

Consent orders five and six were announced on September 1, breaking the California string.  Hypotec, Inc. is a mortgage broker based in Miami, Florida and licensed in 8 states.  Service 1st  Mortgage, Inc. is based in Glen Burnie, Maryland and licensed in about 12 states.  Hypotec will pay a civil penalty of $50,000. The Service 1st penalty will be $230,000.

CFPB has not indicated if the last two orders will complete the sweep.