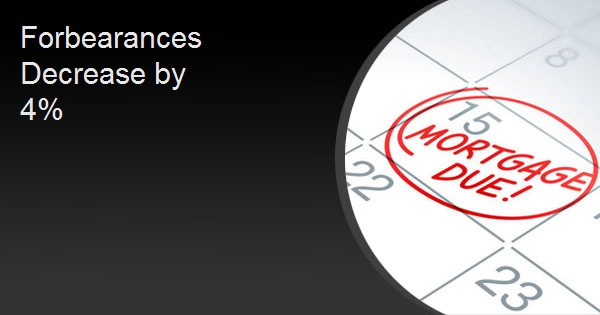 The number of homeowners with mortgages in COVID-19 related forbearance plans dropped during the week ended September 1 after several weeks when there was little change. Black Knight said its weekly survey found 147,000 fewer borrowers in plans than the previous week, a decline of about 4 percent. The company says last week's decrease means there are about 1 million fewer loans in forbearance than at the peak in May. Seventy-five percent of those remaining are in extensions of their original plan.

A total of 3.784 million loans remain in forbearance, 7.1 percent of the estimated 53 million loans that are currently active.  Those loans represent $804 billion in unpaid principal.

Black Knight said forbearance starts have, thus far, shown little impact from the reduction in expanded unemployment benefits. Through the first four weeks of August, forbearance starts were down 13 percent from the comparable four-week period in July. September may provide the true test, however, as impacted borrowers were still receiving full expanded unemployment benefits up through July 31.

More than 2M COVID-19-related forbearance plans are set to expire in September, so Black Knight expects to see a significant volume of either extensions or removals or both in late September and early October, similar to what happened in late June and early July when the first term of many plans expired. Over the last thirty days there has been about a 50/50 split in removals and extensions, with 500,000 loans falling into each category.

The company says $4.6 billion in principal and interest payments must be advanced to investors in the forborne loans each month along with $1.7 billion in tax and insurance payments.