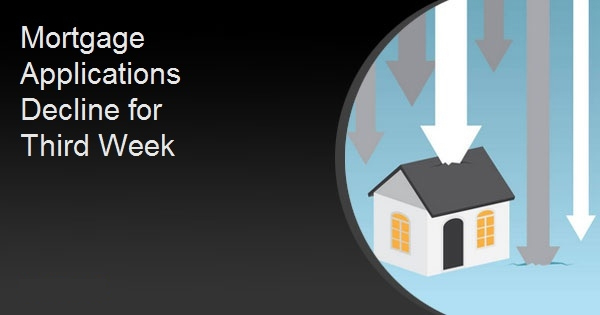 Mortgage applications, both for home purchase and refinancing, declined for the third straight time during the week ended August 28. The Mortgage Bankers Association (MBA) said its Market Composite Index, a measure of loan application volume, lost 2.0 percent on a seasonally adjusted basis compared to the previous week and was down 3.0 percent on an unadjusted basis.

The Refinance Index was also 3.0 percent lower than the prior week although it remained up 40 percent year-over-year. The share of applications that were for refinancing ticked lower, also for the third straight week, and is now at 62.5 percent.

The seasonally adjusted Purchase Index declined 0.2 percent on an adjusted basis and 3.0 percent unadjusted. It was 28 percent higher than the same week one year ago.

"Both conventional and government refinancing activity decreased last week, despite 30-year fixed and 15-year fixed mortgage rates declining to near historical lows. Mortgage rates have remained below 3.5 percent for five months now, and it's possible that refinance demand may be slowing and will not significantly increase again without another notable drop in rates," said Joel Kan, MBA's Associate Vice President of Economic and Industry Forecasting. "Purchase applications were essentially unchanged over the week and were 28 percent higher than a year ago - the 15th straight week of year-over-year increases. Lenders are reporting that the strong demand for homebuying is coming from delayed activity from the spring, as well as households seeking more space in less densely populated areas."

The average contract interest rate for 30-year fixed-rate mortgages (FRM) with origination balances at or below the conforming limit of $510,400 decreased to 3.08 percent from 3.11 percent, with points declining to 0.36 from 0.38. The effective rate was also lower.

The rate for jumbo 30-year FRM, loans with balances exceeding the conforming limit, was unchanged at 3.41 percent. Points increased to 0.38 from 0.35 and the effective rate moved lower.

The average contract interest rate for 15-year FRM decreased to 2.67 percent from 2.70 percent, with points decreasing to 0.36 from 0.39. The effective rate decreased from last week.

The average contract interest rate for 5/1 adjustable rate mortgages (ARMs) declined by 6 basis points to 3.08 percent, with points increasing to 0.43 from 0.42 and a lower effective rate. The ARM share of activity remained at 2.6 percent of total applications.

MBA's Forbearance and Call Volume Survey Showed no change in the number of homeowners with loans in forbearance during the week ended August 23. There were approximately 3.6 million loans in plans, 7.2 percent of active mortgages.

The share of Fannie Mae and Freddie Mac loans in forbearance dropped for the 12th week in a row to 4.88 percent- a 5-basis-point improvement. But that was offset by a 4-basis point increase in plans among loans serviced for Ginnie Mae (FHA/VA) to 9.58 percentage. The forbearance share for portfolio loans and private-label securities (PLS) increased by 7 basis points to 10.44 percent. The percentage of loans in forbearance for depository servicers increased to 7.49 percent, and the independent mortgage bank (IMB) servicers' share decreased to 7.41 percent.

"The pace of new forbearance requests has been relatively flat across investor types, but for those with GSE loans, the rate of exits from forbearance regularly exceeds the rate of new requests," said Mike Fratantoni, MBA's Senior Vice President and Chief Economist. "The exception in these trends are borrowers with Ginnie Mae loans. The loss of enhanced unemployment insurance benefits, coupled with a consistently high rate of layoffs and uncertainty about the job market, are having a disproportionate impact on FHA and VA borrowers."