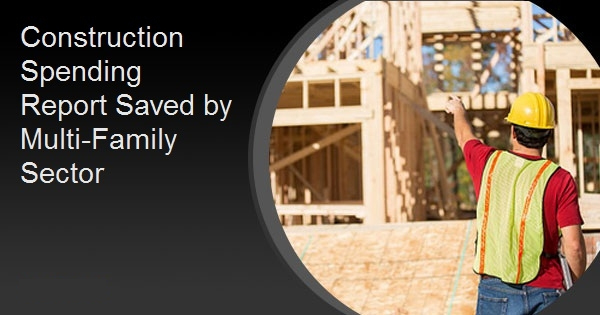 Construction spending as a whole was essentially flat in July, but residential spending showed significant growth. The U.S. Census Bureau reported that total expenditures from both public and private sources were at a seasonally adjusted annual rate of $1.365 trillion, a 0.1 percent increase from June but down 0.1 percent from July 2019.

Residential construction fared far better, accounting for $546.600 billion of the July total compared to $535.586 billion in June, a 2.1 percent gain and 0.5 percent more than was spent a year earlier. For the month, the unadjusted residential spending was $50.112 billion bringing the total for the YTD to $321.585 billion, a 5.7 percent gain.

Single-family construction spending was up 3.1 percent month-over-month to $268.018 billion, but down 3.2 percent from the previous July. New multifamily construction rose 4.9 percent from June and was 6.0 percent higher on an annual basis. Single family spending is 2.9 percent higher YTD than last year at $159.016 billion but multi-family spending has declined by 0.8 percent.

The National Association of Home Builders (NAHB) produced a graph of its construction spending index reflecting the July report. Analyst Na Zhao says the graph (the base is January 2000), illustrates the solid growth in single-family construction and home improvement from the second half of 2019 to February 2020, before the COVID-19 pandemic hit the U.S. economy. New multifamily construction spending has picked up the pace after a slowdown from the second half of 2019. Publicly funded construction was at an annual rate of $351.105 billion in June, a 1.3 percent monthly decline but 5.1 percent more than was spent a year earlier. The total for the YTD is $196.332 billion, representing 6.5 percent growth.

What has stood out this year is the increase in public spending on residential construction although the numbers remain small. The $8.854 billion spent in July was up 1.9 percent from June but was 41.0 percent higher than spending in July 2019. Likewise, YTD spending, while only $4.625 billion in total is 34.9 percent more than was spent to this point last year.