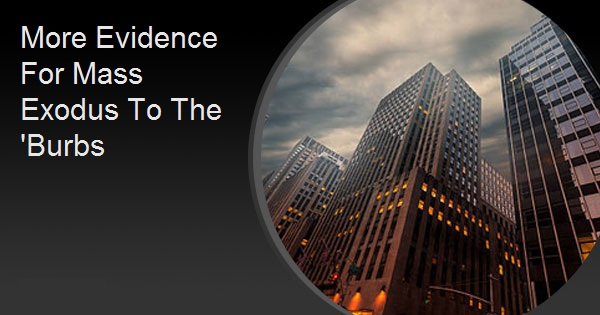 More Evidence For Mass Exodus To The 'Burbs

It has been rumored since the first wave of the coronavirus struck in some of the densely populated urban centers, especially in New York and New Jersey. Now, however, there is substantiation of a population shift from the National Association of Home Builders (NAHB). Its second quarter Home Building Geography Index (HBGI) shows that, while the pandemic caused widespread economic impacts for many businesses, housing has weathered the economic storm, rebounding quickly from an April slump. It also shows that, the only region posting a quarterly gain for single-family construction during the second quarter was small metro suburbs.

Litic Murali, writing in NAHB's Eye on Housing blog says that more than 55 percent of the U.S. population resides in "large metro areas" but these large areas make up only 8.2 percent of all land in HBGI's surveyed areas (all of the U.S. excluding the territories.) Given the risks in the current pandemic are exacerbated by a lack of social and physical distancing, single-family homebuyers are seeking less densely populated areas, i.e., suburbs, for housing. This began to play out in the second quarter with relative growth in lower density markets that represent half of all single-family construction on a four-quarter moving-average year-over-year basis. Those small suburbs saw 2nd quarter single-family construction rise 10.6 percent on a four-quarter moving average basis. NAHB defines small metro suburbs as "outlying counties" of metro areas of less than 1 million in population. Their population growth was followed by small towns with an increase of 9.3 percent, small metro core areas, up 7.5 percent, and exurbs (5.6 percent). Small metro suburbs include counties such as Green County, a suburb of Dayton, Ohio.

As a class, small metro suburbs experienced a staggering increase of 2.3 percent for single-family home building during the second quarter relative to a year prior. This was the only geographic region that experienced a year-over-year increase, with other regional declines correlated with population density. For example, the largest decline was in large metro core areas which declined almost 18 percent compared to the second quarter of 2019.

The survey also found that the market share for single-family construction in low density areas (small metro core and suburbs, small towns, and rural markets) increased from 47.5 percent in the second quarter of 2019 to 48.4 percent. Murali says that, while the annual gain appears small, the changes in market share are usually slow to develop, thus making a one-percentage point year-over-year gain noteworthy, when compared to recent historical data. The relative change in Q2 2020 of lower-density areas' collective market share from the previous year (as expressed in standard deviation terms) has been the greatest of all quarters surveyed in the HBGI and clearly accelerated as a result of the public health crisis and recession of 2020.

The pandemic has been an influence on the growth of low-density markets beyond the related health concerns. With a growing share of the labor force working full or part-time at home, more households are free to seek housing outside of large metro cores and may need additional but affordable space to accommodate their changing lifestyle. But there are also existing housing constraints in urban areas such of lack of buildable land that make less dense areas more affordable.